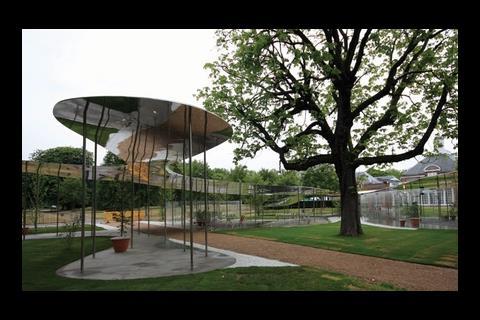 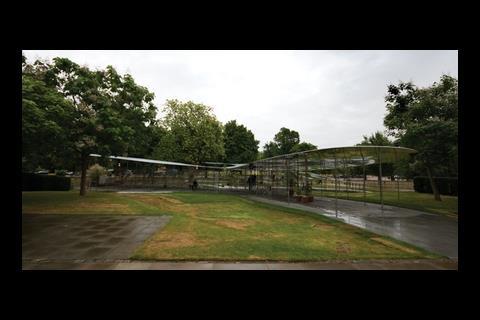 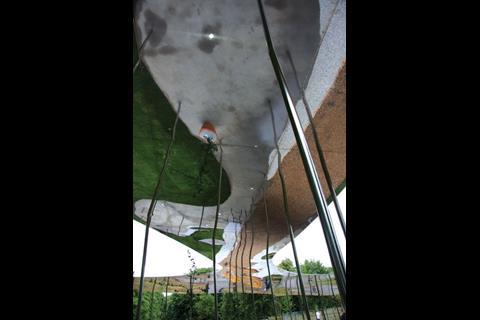 This year’s Hyde Park pavilion is a silvery water snake designed by Japanese architect SANAA. Dan Stewart found his umbrella and went to take a look …

The Japanese architect SANAA describes this year’s pavilion for the Serpentine Gallery as a “floating cloud” – ironic, since its launch on Wednesday was accompanied by dense layers of the real thing. Hardly auspicious for the launch of a summer pavilion.

SANAA is the ninth architect to tackle the structure – the honour is reserved for designers who’ve never built in the UK before – and it follows the likes of Zaha Hadid, Daniel Libeskind and Oscar Niemeyer. This building could hardly be more different from last year’s model: a deconstructivist festival of angles designed by Frank Gehry.

SANAA’s pavilion is much more in keeping with its environs: a canopy of aluminium held up by steel columns, it swirls around the site like a sinuous pool of suspended water. Ryue Nishizawa, one half of SANAA, said he and partner Kazuyo Sejima had been influenced by its surroundings. He said: “The shape creates a relationship with the park … we had ideas of water and rainbows and leaves.”

As usual, the design team worked with Peter Rogers of Stanhope and Cecil Balmond and Ed Clark of Arup to make sure the structure was easily demountable for reuse elsewhere. The pavilion’s reflective surface was achieved using polished aluminium panels bonded to a plywood core. Transparent acrylic panels make up free-standing “walls”.

The finished building is quiet and reflective in more ways than one. In its ordered elegance it resembles a Japanese garden. It’s not as loud a statement as some of its predecessors, but seems to tap into the intention of a summer pavilion rather better than most of them. Let’s just hope that its main function is not to shelter visitors from the rain …

Original print headline - The serpent in the garden