Thin end of the wedge

The Cheesegrater does more than any other skyscraper to open itself up to the public, but it’s shame it merely adds to the chaos of London’s skyline 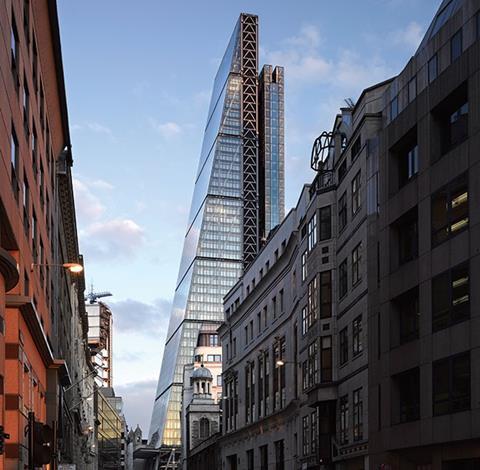 If you discount the ridiculous spire perched on the top of Heron Tower, then the City of London has a new tallest building. The 225m high, 50-storey Leadenhall Building has already been a feature of the London skyline for some time. But the shell and core stage of its construction has now been completed and it is at the start of a nine-month internal fit-out programme. It will open fully next year.

Nicknamed the Cheesegrater due to its distinctive slanting profile, the Leadenhall Building has been designed by Rogers Stirk Harbour + Partners and sits right opposite their most famous City creation, the Lloyd’s of London building.

But in a multitude of ways, this building is a world away from the antagonistic provocation of its forebear. Gone is the militaristic, hyper defensive techno-industrialism of the Lloyd’s building. In Leadenhall we have a svelte and elegant form, vast sheathes of sleek, transparent glazing and an extraordinary integration of public realm into the heart of the building.

But Leadenhall also marks a bigger milestone than that of the interesting evolution of an architectural practice’s signature style. As the City’s “tallest” building and the first one since the Gherkin to interrupt the famous processional route from Fleet Street to St Paul’s, it provides yet another opportunity to assess the enduringly fractious urban relationship between tall buildings and London’s historic fabric. 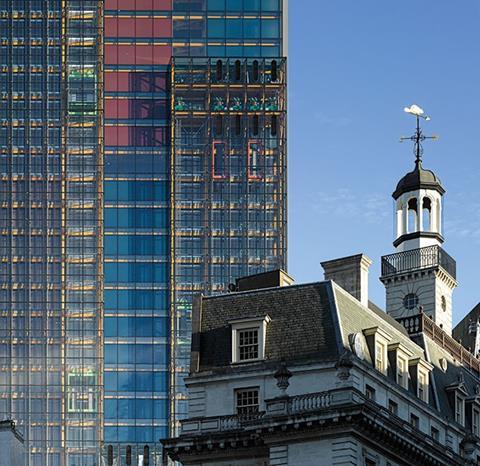 The rear of the tower looms over Edwardian St Helen’s Place, starkly illustrating the City’s mix of old and new

The Leadenhall Building is located to one side of St Helen’s Square, a sunken piazza encircled by a phalanx of skyscrapers that forms one of the City’s most dramatic locations. Tower 42, Heron Tower, what was to be the Pinnacle and Norman Foster’s Gherkin and Willis towers as well as the Lloyd’s building are all the Leadenhall Building’s immediate neighbours. Its closest neighbour, the sleek, Miesian shaft of the 1969 Aviva Tower, enjoys the dubious historical distinction of being the first City tower to exceed the height of St Paul’s and still has a strong claim to being the City’s best skyscraper.

In effect there are actually two connected Leadenhall towers. The first is the distinctive chamfered block that faces onto Leadenhall Street and forms its “front”. The second is the slightly shorter service core to the rear that contains lifts and toilets and essentially forms the “back”.

But of course it is the main block with its distinctive sloping prow that commands most attention - and deservedly so for it is a truly startling structure. Fifty storeys of shimmering, crystalline glass glide effortlessly skywards in a single continuous sweep. The most exhilarating skyscrapers emphasise their verticality in a forceful and dramatic way and this simple gesture of an inclined, spire-like form is devastatingly effective.

Behind the glass veil in which the tower is encased, RSHP’s trademark structural expressionism comes to bear, but with unprecedented subtlety and restraint. The tower’s vertical sweep is faintly interrupted by six transom levels and the diagrid cross-bracing that wraps around the tower’s frame like a steel exoskeleton.

Wisely, this is sheathed behind glass on the front so as not to disrupt the all-important swooping gradient, but it is dramatically exposed on the sides within louvred vertical shafts that proudly protrude like muscular steel ribcages. 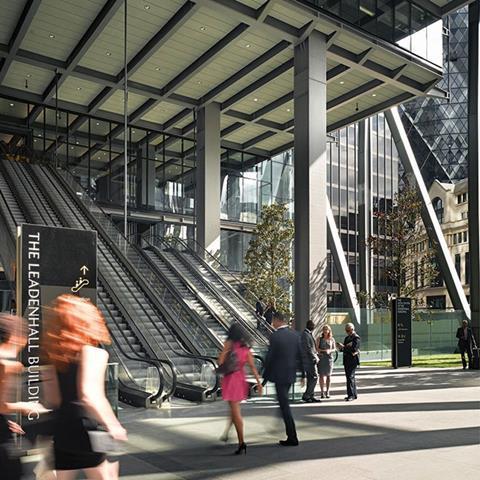 But the tower’s masterpiece is what happens at its base. Rather than offering public access to the top of the tower, which many of the surrounding skyscrtapers already provide, the architects made the early decision to afford uninhibited public access to its base.

Accordingly, for the bottom seven storeys of the tower its glass veil is shorn away to dramatically expose the steel cross-bracing as it hurtles to the ground. The space within this cross-bracing is now treated as a multi-storey open void, into which one of London’s most extraordinary public spaces has been inserted.

Two soaring banks of escalators sweep visitors up to the two upper level lobbies located above a covered, tree-lined expanse directly linked with the pavement on Leadenhall Street and, from next year, St Helen’s Square next door. A new north-south public link to the historic courtyard at the rear of the tower is also created for the first time.

Even the canopy which crowns this undercroft’s entrance has validity. While most canopies on tall buildings are an extraneous irrelevance (see the Shard and the Heron Tower) by aligning this one to the height of the classical Lutyens block next door, the architects have done as much as they can do to consolidate a 50-storey building within a historic townscape of primarily eight-storey buildings.

This resulting covered space is without doubt the most generous and civic contribution a tall building has ever made to London’s public realm. It is certainly the most dramatic since SOM’s twisting, scissor-like funnel at the base of nearby Broadgate Tower.

This unique, covered space may indeed be privately owned, but by essentially hoisting the tower seven storeys above the ground, the building animates the surrounding streetscape and ensures that the public realm is folded right into the heart of the tower in the most porous and theatrical way possible. This dramatic base is as much an urban stage-set as it is an entrance. 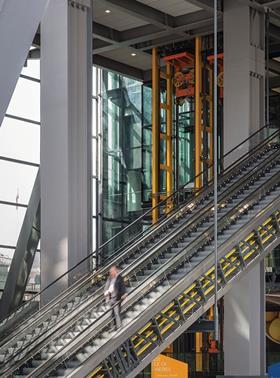 At the top, the tower is perhaps not quite so successful. A cursory glance at London’s haphazard skyline shows how architects have grappled, with little success, at resolving the summits of their skyscrapers.
The mushroom cloud that swirls at the top of Rafael Viñoly’s Walkie-Talkie building is easily the worst offender but the angular toupee laughably flung onto the head of the Heron Tower fares little better. Even the Shard, whose humbly transparent and delicately fracturing crown makes for a haunting silhouette, has a latent, unresolved quality to its summit.

The Leadenhall Building’s crown certainly makes for a strident, if sudden conclusion to the tower. The inclined facade simply stops when the gradient finally meets the exposed, exoskeleton “ribcage” behind it. Many will have absolutely no problem with this arrangement and while Rogers himself admits that they explored several options, he says this was seen as the most “logical” conclusion.

But there seems little point in establishing such a strong, sloping dominant visual geometry then slicing it off at the exact point that it meets a secondary, vertical one.

RSHP, with their obsession with structural authenticity, invariably saw no reason to extend the slope above the “ribcage” for purely aesthetic reasons. Nevertheless, it seems a shame to hamper a volume with a flat roof when its side profile spends 225m suggesting that it will naturally end with a point.

The final significant component to the building is its rear. Technically, skyscrapers shouldn’t have “backs”. Because high-rise buildings have multiple aspects visible at any one time across a large urban area, they must be unified by a single visual idea in order to be legible. To see what occurs when this doesn’t happen, one need look no further than the androgynous mess that is the rear of Broadgate Tower or Ian Simpson’s Beetham Tower in Birmingham.

But here, somehow, RSHP pull it off. The rear facade presents a very different aesthetic to the front one. Here a soaring, vertical glass shaft offers an extraordinary level of transparency that exposes the scenic lifts that glide up and down the building. The elevation morphs into a giant colour-coded diagram that provides a level of intimacy and playfulness that belies its massive scale.

The steel superstructure is yellow, the passenger lifts orange, goods lifts acid green, male toilet windows an opaque blue and female opaque red. With its moving lifts and exposed structure here the building is revealed, in line with RSHP technological tradition, as an animated, living machine, with its inner workings proudly exposed within a series of stacked, glistening glass jewel cases piled to infinity. 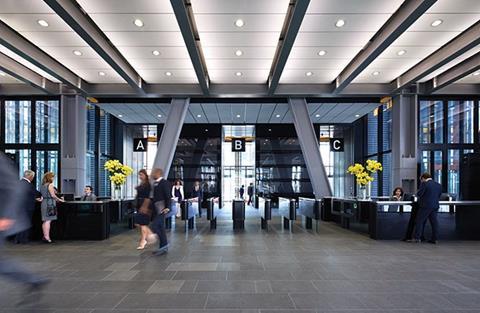 The tower’s cross-braced superstructure is dramatically revealed throughout the interior, even in one of its twin entrance lobbies

But what of the Leadenhall Building’s wider urban impact across the City? There is a school of thought that mistakenly believes that what is most important with tall buildings is how they meet the ground, as if crimes of scale, massing, views and impact can be atoned by crisp detailing and a nice canopy. The Leadenhall Building is a perfect example of why this theory does not work. For although it meets the ground quite brilliantly, as all towers should do, its wider urban impact is more damaging.

To find out why, we must travel a mile west to Fleet Street. For over 300 years the procession down Fleet Street towards St Paul’s Cathedral has offered one of the capital’s most stirring urban tableaus. As Fleet Street twists and turns towards the cathedral, the dome of St Paul’s rises messianically above the jumbled streetscape and as the cathedral gets closer and perspective shifts, the slender spire of Wren’s St Martin-within-Ludgate church dances expectantly around the dome.

But now, this delicately poised sequence has been interrupted by the wedge-like form of the Leadenhall Building to the side of the cathedral. Much has been made of how the tower’s chamfered profile was devised to enable it to swerve out of the protective viewing corridors that radiate invisibly from the cathedral. But when viewed from the Fleet Street perspective the slant fails to conceal the unfortunate interruption that the Leadenhall Building has imposed on one of London’s most cherished urban vistas.

With uncustomary prescience, ex-City planning chief Peter Rees apparently instructed the architects that he did not want to see the Leadenhall Building from Fleet Street’s famous Olde Cheshire Cheese pub. That the tower is palpably visible from the pub chimes with the insensitivity of a planning department which, according to Rees’s replacement, has only just recently understood that “the soul of the City is its historic core”.

The Leadenhall Building’s awkward insertion into its historic context is yet another sad reflection on the continuing damage being done to London’s urban character by the lack of a strategic tall buildings vision for the city that could identify areas where tall buildings might or might not be appropriate. Without it accident and opportunism lurch London’s skyline from one disaster to another, with the unique urban identity that made the city so coveted in the first place being slowly but inevitably chipped away in the process.

The Leadenhall Building is an exhilarating skyscraper but, like many others in London it is simply in the wrong place. On a recent architectural boat tour a quizzical tourist pointed to the north bank and asked me “what’s that little castle on the left?” He was referring to the Tower of London, but crushed under a barricade of tall buildings, it was virtually invisible. London’s skyline is a complete mess. At least in this instance it is a building of some elegance that adds to the chaos. 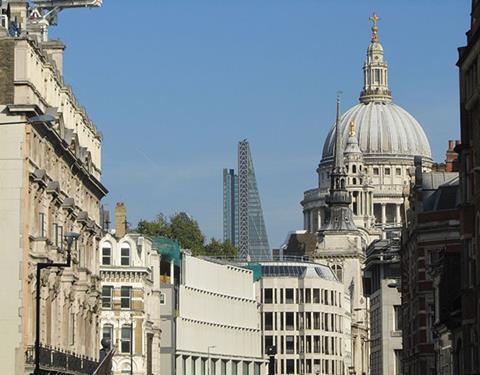