Thumbs up for new Thameside hotel 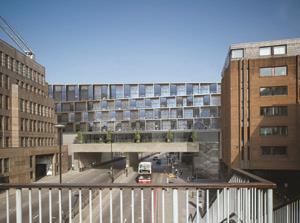 Bennetts Associates Architects’ plans for the five-star Queen Hithe Hotel have been approved by the City of London.

Constrained by St Paul’s Cathedral’s heights and the retained bridge structure, the hotel forms a distinctive wedge-shape which extends over the full length of the site.

It will also have to negotiate the Scheduled Ancient Monuments that partially occupy the site, including the remains of Huggin Hill Roman Baths to the north and the original Queenhithe dock to the south.

The development will also allow for a new walkway between Queens Quay House and Bull Wharf, completing the final link in the City of London’s riverside pedestrian route.