For decades, public fountains have declined in number as concerns over their environmental efficiency have grown. But technological advances mean we can now enjoy the spectacle of water without any of the misgivings about waste 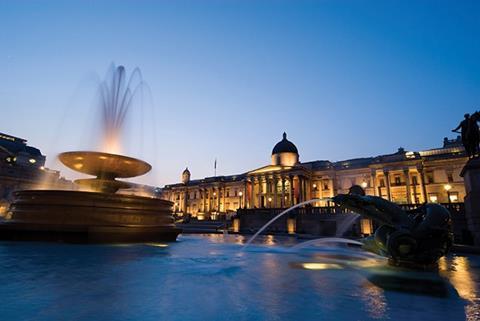 Contrioversially, the plumes of the world-famous Trafalgar Square fountains have now been significantly reduced from this height to minimise water evaporation

For thousands of years in civilisations all over the world fountains have been viewed as an attractive, artistic and civilising feature within the urban environment. As urbanisation across the world rapidly accelerates, they are also increasingly considered a critical reminder of the natural world within the built-up city fabric. Today, as technology advances, fountains can also be combined with lighting, music and performance to create an even more dramatic sensory experience.

While few would dispute the visual, urban and social benefits fountains provide, in recent decades fountains have been dogged by two criticisms: that they are expensive to run and maintain; and that they are environmentally inefficient.

From the 1970s when economic woes and rising oil prices put many Western municipal authorities under increased financial pressure, there was in many countries a reluctance to incorporate fountains into the public realm. In recent decades in the UK in particular, water fountains, once used by thousands daily in their Victorian heyday, have been disappearing from the urban scene.

The other major and arguably more damaging accusation is that fountains are environmentally wasteful, which is seen as morally untenable in a world where water scarcity plays an increasing role in public and political consciousness. 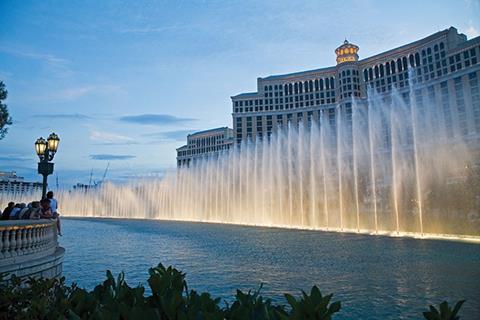 While undeniably spectacular, the famous Bellagio Fountains in Las Vegas are an extreme example of the environmental waste associated with extravagant public water features

The famous Bellagio Fountains on the Las Vegas Strip may look and sound spectacular. But using 22 million gallons of water to shoot jets 500ft into the air above an 8.5-acre artificial lake remains hard to justify environmentally in a city in the middle of the Mojave Desert that receives just four inches of rainfall per year.

Of course, the Bellagio (which incidentally sources its water from a private well and not the municipal supply) is an extreme example. But even in soggy Britain, questions have been raised about the environmental impact of fountains.

London may not have as many fountains as Paris or Rome but they still form an important part of its street architecture and public realm. The city’s most famous fountains are in Trafalgar Square and in 2009 both they and the three 50-year-old subterranean engines that power them underwent a radical £190,000 renovation project in an effort to reduce maintenance costs and increase environmental efficiency.

The historic fountains rely on 100,000 gallons of circulating water and were once powered by steam engines behind the adjacent National Gallery. However, prior to the renovation only one of the engines underneath the fountains was working. Additionally LED lighting was installed to reduce bulb replacement costs, which had previously amounted to £1,000 per bulb. Post-renovation, the plumes of water the fountains produce are capable of reaching an impressive height of 80ft.

But, to the disappointment of many of the square’s visitors, today they rarely reach anything like this height and often resemble the gurgling bubble of a beer bottle opening. And, according to the management team that runs the square, this is firmly down to environmental reasons. 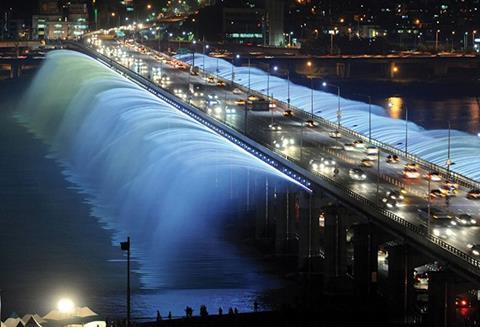 Banpo Bridge in Seoul, South Korea, which pumps continuously recycled water drawn directly from the river, is a spectacular example of how fountains can enhance the urban landscape

A spokesperson says: “The plume on the fountains has been turned down to reflect that it is necessary to conserve the water use and the capacity of the pumps. The evaporation of water that results from a higher plume results in higher water replacement levels and associated costs over the course of a year. Therefore the lower plume reduces water costs and has a wider saving on an environmental level. On a further positive note, the cascade which is now created by the lower plume is actually a feature which has not been seen for over 20 years.”

Despite the odd insistence that a weaker spectacle is a positive step, the fact remains that the fountain was essentially designed 171 years ago. But there is a now a new generation of striking contemporary water features that are able to deliver environmental efficiency while maintaining and in many cases dramatically increasing visual impact.

Perhaps the earliest example of this modern trend came with the redevelopment of London’s Somerset House in the late 1990s. The centrepiece of its transformed central courtyard was a dramatic installation of 55 choreographed water jets that spring directly from its granite paving. Somerset House claims that this was the first major public fountain scheme to be commissioned in the capital since 1845.

Since then both London and the rest of the country have seen similar installations introduced at a number of new or revamped public spaces. Some of the most prominent examples are Granary Square in London’s King’s Cross, South Plaza in the Olympic Park and the Mirror Pool in Bradford. All follow the modern Somerset House tradition of having water jets inlaid directly into paving and all were also designed by water feature designers the Fountain Workshop working in conjunction with other architects and engineers. 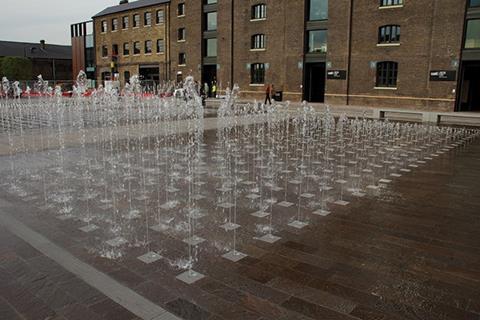 Many of these new fountains employ state-of-the-art technology not only to deliver more dramatic choreographed water performances, but provide more efficient maintenance and control. Installations can often now be monitored remotely via an internet connection enabling operational issues to be identified and resolved via smartphones and tablets from anywhere in the world. Granary Square is even trialling a downloadable app (“Granary Squirt”) that enables the public to take control of fountain performances at various times of the day.

Bradford’s Mirror Pool opened in 2012 and provides a particularly dramatic example of how these new trends in modern fountain technology are driving real innovation with regard to environmental sustainability and water-sensitive design while still providing an awe-inspiring visual spectacle. Designed in conjunction with Arup and landscape architect Gillespies, the 3,600m² fountain display sits in the centre of Bradford City Park. Comprising 100 jets shooting plumes of water up to 30m in the air, it is the largest water feature in the UK.

At £25m, the installation did not come cheap. But, according to Fountain Workshop director David Bracey, “paying a premium for a well-engineered system will pay you back in the long term with reliability and length of service. The expense is relevant to its perceived value.” That value has been estimated to bring the city of Bradford up to £80m per year in additional visitor revenue and commercial opportunities created by the new public space. 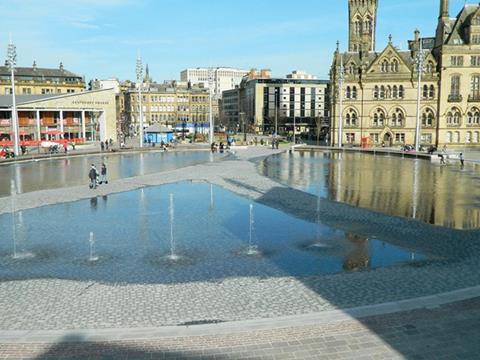 At 3,600m² the Bradford Mirror Pool is the largest water feature in the UK and one of the most environmentally innovative

But at the Bradford Mirror Pool what happens below ground is almost as interesting as the choreographed water displays that take place above. As witnessed at Trafalgar Square, one of the biggest problems with fountains from an environmental standpoint is water evaporation. However, at Bradford the pool replaces evaporated water by trapping surface water, which is then drained back to main storage tank that supplies water to the fountains. This process essentially recycles and recirculates rainwater using a small water treatment plant to maintain quality.

Bracey sees such solutions as central to delivering maximum visual spectacle while ensuring that water and power consumption is minimised. “In many cases we can also harvest rainwater and store it for later use so that we can reduce demand on the mains water supplies. Around 85% of the pumps we use are either inverter driven or incorporate some other ‘soft start’ power efficiency drive device [more efficient] to minimise power usage.”

But the Bradford Mirror Pool also plays a role in its wider environmental infrastructure. Prior to its construction, rainwater drained directly to a combined sewerage network that was operating at capacity. Installation of the new fountains enabled the construction of a drainage network which collects surface water before discharging it to a culverted water course on the site boundary, thus creating new storage capacity in the existing combined sewerage network.

In providing a rare concentration of civic expression, political will and visual spectacle, fountains embody the spirit of public space and the omnipresence of the natural world. In the words of Bracey, “fountains have a unique ability to animate spaces and entertain. Water evokes feelings of purity and clarity and represents the source of life itself. What’s not to like?”