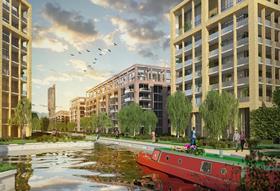 A Chinese contractor has entered the top 10 contractor table for the first time after landing a deal on a £700m residential scheme in Salford.

Beijing Construction was confirmed for a £59m contract last month to build 571 flats in the Middlewood Locks development after being named preferred bidder at the end of last year. The firm has a base in Manchester, and previously told Building it aims to become a “top 20 UK contractor within five years”.

Meanwhile, Laing O’Rourke has topped both contractor tables for May after it was confirmed for the £178m revamp of the Intu Watford shopping centre. The contractor also bagged a £76m residential deal at the start of last month to build 192 student flats at Imperial College London. The £254m two-contract haul puts Laing O’Rourke at the top of both tables, ahead of Vinci in second for the table excluding civils and Balfour Beatty second including civils, with Vinci just behind Balfour with civils taken into account.

Balfour’s 36 wins include a £130m contract to build a congestion-busting 3,600-space lorry park near the M20 in Kent, seen by the government as a long-term solution to Operation Stack.

Next on the overall table is civil engineering contractor Barhale, who won a £130m slice of the £300m project to upgrade the Frankley Water Treatment Works in Birmingham for Severn Trent Water, which includes building a 25km pipeline. Kier follows Vinci and Barhale after bagging 37 small contracts worth a total of £123m.

On the civils side, VolkerWessels enters the top 10 after winning three projects including a £97.5m highways maintenance deal with Camden council.