A massive highways maintenance contract with Westminster council helped FM Conway shoot to the top of the contractors’ league table last month, with the firm securing a £466m contract haul.

ISG and Wates were big movers last month, with ISG’s £207m haul across 43 projects lifting it from 10th spot in February to third on the overall table and second on the league table, excluding civils.

ISG’s project wins included the £115m job to fit-out the new UBS HQ at 5 Broadgate in the City of London, which is the largest London office fit-out job to come to market in the past year.

Wates moved into fourth spot overall, and third spot, excluding civils, with the contractor’s wins including two London office jobs - a refurbishment project worth £29m for Land Securities and a new build, worth £39m, for Development Securities.

Overall the CPA/Barbour ABI construction index stood at 108 in March, down one point from January and February.

Noble Francis, CPA director, said the pace of increase in contract awards seen in mid-2013 appeared to have slowed at the beginning of this year, as contractors worked through projects signed over the last 12 months. 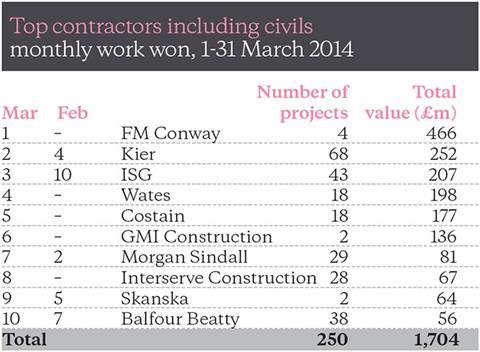