Willmott Dixon also one of the month’s biggest movers, with £262m gained across 36 new projects 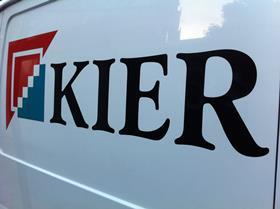 Kier edged ahead of Willmott Dixon last month to take the top spot in the contractors’ league table, with a £281m contract haul.

Kier’s haul came across 63 contracts and saw it top the contractors’ league table, including civils.

The firm’s £262m contract haul comprised 36 contracts and included a £36m sports and leisure centre for Wycombe council and a £19m library building for the University of Bedfordshire.

Osborne was also a big mover last month, with a £236m housing repair and maintenance contract for Dacorum council forming the vast bulk of its £238m haul, which saw it move to third in the league table, including civils, and second in the table, excluding civils.

Other notable wins included Skanska’s £95m job to build the One Mitre Square office scheme for developer Helical Bar, helping it to a £104m contract haul and 5th place in the overall table.

Overall the CPA/Barbour ABI construction index rose to 112 in April, up from 108 in March, which ended two consecutive months of falls.

Noble Francis, CPA director, said that while private housing was driving much of the growth across the industry, the latest data showed that there was a rise in the number of contracts within the commercial sector, particularly offices, retails and hotels, as well as the industrial sector. 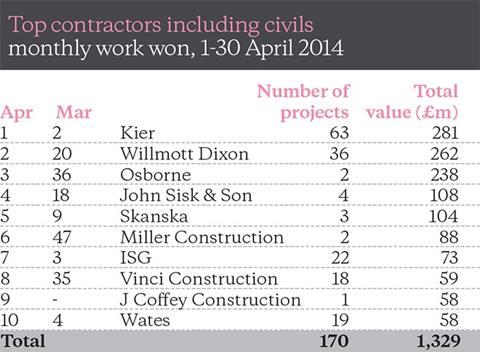