The guts of the UAE: developer Gurjit Singh on Abu Dhabi 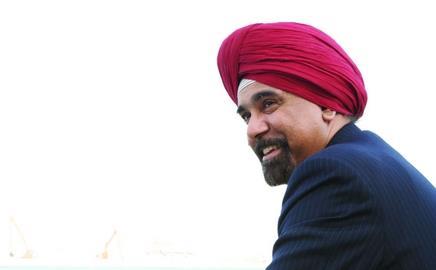 As Abu Dhabi prepares for next week’s Cityscape conference, top developer Gurjit Singh tells David Rogers why the emirate’s grand plans are still going swimmingly when so many in the world are dead in the water

As you drive the 100km or so south from Dubai to Abu Dhabi, you can tell you are nearing your destination by the increasing number of construction sites you pass.

The massive Yas Island development, for instance, where a Formula 1 Grand Prix will be held this November. Yas’ infrastructure is being built in a series of civil engineering projects, and the main road weaves through the bridges and overpasses built to accommodate it. Beyond that is a striking building that will eventually be the headquarters of Abu Dhabi developer Aldar, and beyond that is the giant Al Raha Beach development, which stretches away along the shoreline.

Whereas Dubai might have the glitz and, more recently, the despair, Abu Dhabi is the guts of the UAE. And where Dubai has precious little oil, Abu Dhabi has lots, and it is obviously still building. To find out what its plans are, and what work there will be for British firms, who better to talk to than Gurjit Singh, the chief development officer of Sorouh? This is the emirate’s second largest developer, with a 69.8bn dirham (£13bn) property portfolio on its books.

The interview takes place in the Beach Rotana hotel, a well-known meeting point in the so-called tourist club area of the city. He is a modest man who eschews the usual trappings of a developer. “I’m just an employee,” he says. But he is one who oversees the developer’s procurement, operations and finance. Sorouh’s workload includes The Gate, a 6bn (£1bn) dirham mixed-use scheme being built at Shams in Abu Dhabi, and the Al Gadheer development, a 15bn dirham (£2.7bn) township that will eventually house 20,000 people.

For Singh, a Malaysian of Sikh descent, Abu Dhabi is not facing the same problems as Dubai. “Dubai is in a slowdown, whereas Abu Dhabi is going through a consolidation,” he says. “A downturn sees a lot of job losses and not much job creation. The consolidation in Abu Dhabi is attributed to the same liquidity constraints but it is more steady here. What has happened has meant a lot of developers have to think about how they restructure their developments. The product has to be more end-user friendly.”

This last point is interesting in that in the scramble to pump out schemes, Singh says some developers sacrificed quality on the altar of speed. “Developers have to change their approach from a sale strategy to a construction-focused strategy. The discerning buyer is more focused on what they’re buying. Before there was a lot of onus on getting things sold; now it’s more about selling with a conscience.”

Singh thinks the credit crunch will provide more stability in the region. For one thing, future real estate buyers are just as likely to come from the Gulf states themselves as from Europe, Russia, India, Iran and Pakistan. “We won’t go back to the old ways,” he says. “In the future, there will be a lot more domestic buyers, a smaller catchment of people, but they will really be interested in buying properties to live in.”

Still, the downturn has forced Sorouh to revise how quickly it builds its projects. Developments will be implemented in phases and units put onto the market in more manageable numbers.

Singh thinks that the Gulf, in particular, does have a future. He says: “Because the property crash in Dubai has been so spectacular and so rapid, the economy there has probably over-corrected itself. But sentiment up there right now is on the floor.”

In Abu Dhabi, he says, things are not so negative. The emirate is marketing itself as an alternative to Dubai: where Dubai’s flashiness attracted 20-somethings looking for a good time, Abu Dhabi is targeting families. It’s hard to imagine last year’s big Dubai news story – the British couple allegedly caught having sex on a beach – happening in Abu Dhabi.

We won’t go back to the old ways. In the future, there will be a lot more domestic buyers, who will really be interested in buying properties to live in

“While Dubai has become a magnet, Abu Dhabi has become an escape route,” says Singh. “You can get back to nature here and you can get out of the city and into the emirate.” Singh says that elsewhere in the Gulf, transport links and utilities often seem to be set up after the towers are complete. In Abu Dhabi schemes to build roads, deep water ports and desalination plants are keeping things steady.

However, developers in Abu Dhabi know the market is tight and will take advantage of it by driving harder bargains with their builders. Singh says: “With the downturn, the availability of contractors has improved. We can get a better price.” New contracts, he says, will better reflect current market rates but although rival developers such as Aldar are demanding retrospective fee cuts, Sorouh will not renegotiate deals.

Contracts are based on the Fidic model and the firm tends to use local builders such as Arabtec, Orascon and Arabian Contracting, but it has not closed off avenues to UK firms. “We look for access to resources,” says Singh, “and contractors’ ability to deliver quickly on materials and machines is looked upon favourably.”

Consultants have a slightly different set of criteria to meet. “With consultants, it’s about the experience of individuals and the jobs they’ve done. We like them to have an appreciation of how to manage the throughput of an entire development from office space to malls and hotels.”

Assessment meetings are held with consultants every two weeks, topped up by workshops and brainstorming sessions. Most understand what Singh wants, but if they do not they can be “cured”. He says: “If there is any slack we have curing periods which usually last between 30 and 60 days.” He has not had cause to kick anyone off a project for under-performing, but smaller firms may be supplemented by a bigger one. “Everybody,” he says, “wants to get the job done properly.”

Indeed, the current climate has led to greater attention to detail. Singh says: “Those contractors and consultants that do this will find it stands them in good stead. When there was a lot of work on, the attention to detail hasn’t always been there.”

Sorouh has not worked much with UK firms but Singh, a Cambridge university graduate in land management, is interested in what they have to say. “We’ve tended to work with local firms but British companies are known for their quality.” While perhaps not pushing at an open door, the UK’s reputation for producing good engineers certainly helps.

But Singh is adamant that Abu Dhabi will not get carried away like Dubai. “That,” he says, “was a volcanic eruption of growth.” And volcanoes usually leave destruction in their wake.

When buyers realise that sustainability means that their bills will come down, that is when we will see a big push for it

When the situation improves, we may take a look at income-producing properties in Europe.

Of course, that includes the UK

Developers will have to consolidate. It has sharpened the focus of every developer on every dollar

I was born into it but I don’t support India

Before coming to Abu Dhabi, Gurjit Singh, 47, spent 13 years in Singapore where he was group director for Sentosa Leisure, the property company behind the island destination of the same name.

A fellow of the RICS, he spent the early eighties as an undergraduate at Magdalene college, Cambridge, before heading back to Malaysia where his time included a stint at the Sime Darby Group.

He is married with four children.

For news from the Cityscape conference go to www.building.co.uk/global

Original print headline: Why we are not Dubai