A night to remember

The Building Awards ceremony was all glitz and glamour this year with a swanky casino, anecdotes from football stars, crushed velvet suits and er, a picture of an enormous pile of boxes …

Stars in their eyes

The industry glittered at its very own night of a thousand stars last Thursday as it celebrated the Building Awards at London’s Grosvenor House hotel. Some stars shone even more brightly than others, though. One of the most dazzling supernovas was David Bucknall, chairman of RLB, who appeared in an astonishingly shiny dinner jacket made from crushed velvet, which glowed purple in the lights as he stepped on stage to present an award. Meanwhile, presenter for the night Dara O Briain couldn’t quite keep a straight face when it came to the Manufacturer of the Year award. “What’s behind that wall of boxes? That’s the question,” he asked when one nominee submitted a picture of an enormous stack of products to represent their entry.

Mingling at the drinks reception before the awards was football legend Gary Mabbutt. The former Spurs captain was in no mood to chat construction because, by his own admission he “didn’t have the foggiest”. Mabbutt instead gossiped about the tabloid techniques used to elicit information from his teammates. The News of the World apparently used to send two buxom beauties to Spurs team parties. If they could have tapped into Mabbutt’s then non-existent mobile phone they wouldn’t have even had to leave the office.

After the awards, diners flocked to the charity casino to try to gamble their way to a champagne hamper. Yet others had their mind on a flutter even before the starters had arrived. Chairman of Doyle, Stef Stefanou, was tipping Grand National runner Or Noir De Somoza, with odds of 50/1. Coming from the stable of David Pipe, it seemed like a good bet. Sadly, it fell at fence six come the big race at the weekend. Not so much Black Gold (“Or Noir”) as No Gold.

Housebuilder Telford Homes was keen to impress the market last Friday with a trading update boasting of a
three-and-a-half year banking facility to buy land. The text of the announcement was reassuring. Trouble is, the pound sign somehow didn’t make it onto stock exchange website investegate.co.uk so its headline ended up reading: “Trading Update & new ?70m banking facility”. Not exactly a symbol that will give the City confidence. A flexible loan perhaps?

Is it an outdated stereotype that Tories are posh southerners and Labour politicians are rather more earthy Scotsmen? Unfortunately, in construction it appears not. Mark Prisk, the Conservative construction minister, is a fellow of the RICS no less, grew up in Cornwall and went to the independent Truro School. Gordon Banks, his Labour shadow, worked at Costain before becoming chief buyer for Barratt, and went to the Lornshill Academy in Alloa, a comprehensive that a few years ago reportedly began sinking into disused coalmines. Labour vs Tory; North vs South; state vs private school - should we add to this contractor vs surveyor?

Musical mastermind Stephen Ratcliffe of the UK Contractors Group (UKCG) has had a trying time of late. Preparations for his guest appearance on BBC Radio 4’s music quiz Counterpoint almost suffered a setback this week following a crash at London’s Russell Square. The keen cyclist was making his way to work when he lost control of his bike and collided with a black cab. Despite the forces of gravity, Ratcliffe managed to stay on his bicycle without crashing to the ground. What a trooper. 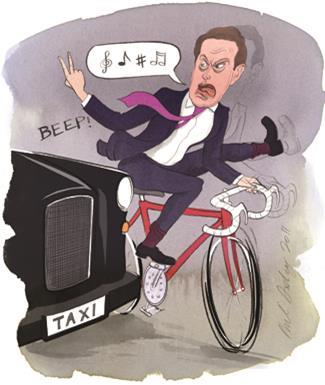