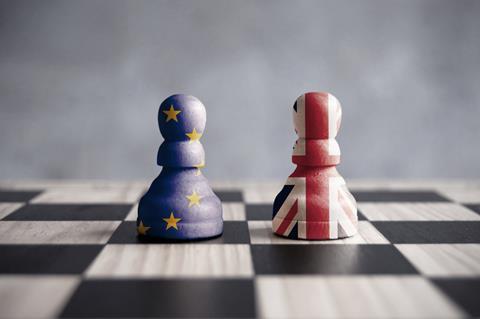 Here’s a selection of industry reaction:

“The outcome of tonight’s vote plunges the country and the industry into further uncertainty. While there are fundamental issues in Theresa May’s deal, this decision by MPs will prolong the economic impact on businesses and local communities up and down the UK.

“One of the biggest concerns for construction bosses will be a further decline in the pound, leading to increased pressure on material prices. The construction materials price index increased 5.3% on the year in January – a significant jump which has seen the cost of net imports from the EU rise to the highest level since 2011. Combined with the ever widening skills gap – many will be wondering how they are expected to deliver projects at the necessary rate.

“This toxic mix, with the added Brexit fear factor, has the potential to paralyse construction growth. While it is now less likely than ever that we will have our ducks in a row prior to our exit from the EU, the industry needs clarity on our access to essential construction talent from the EU, to ensure we have the manpower to deliver.

“Despite the challenging environment we still need to build, a general election will be disastrous for the country. Right now we need a government that can reassure the industry that it is business as usual and we cannot be side lined, it is local businesses, the market and economy that bears the brunt of continued delays.”

Noble Francis, economics director at the CPA and professor of Construction Economics at The Bartlett, UCL:

“Everyone, including the Prime Minister, was aware that the vote on draft Brexit agreement was only going to go one way and the uncertainty continues, just with less time available.

“The markets have assumed that the extent of the loss yesterday means that we are likely to have a softer Brexit, which is why there has been little movement in the stock market and exchange rate today. However, a delay to Article 50 and no deal still remain on the table.

“The Brexit issues that were outstanding a year ago remain the same issues today. Firms are hindered from making major new investments due to uncertainty concerns over long-term returns on the investment and firms are having to plan for the short-term as well as possible. The majority of construction materials and products are made in the UK but firms will still need access to the materials and products that are imported.

“On skills, there are already skills shortages in many key construction trades and managerial occupations so if the government wants to increase the number of new homes and build high profile major new infrastructure such as Hinkley Point C and HS2 then it will need to ensure that construction has the access to key skills.”

“As a global business with our people, clients and projects spanning more than 70 countries around the world, Arcadis has been closely monitoring and planning for all eventualities during the Brexit negotiation process.

“Following the vote in the House of Commons yesterday we remain in favour of the need to secure a robust deal from the EU. We believe this reflects the interests of our people, clients and the wider UK economy. We hope the UK government will now exhaust all options to ensure a deal is in place before the end of March 2019.

“In the event of a ‘No Deal’ situation, it is likely this will mark a period of heightened uncertainty in the UK. Arcadis will continue to take a constructive and pragmatic approach, working in partnership with our people and clients to help mitigate risk and plan for the future. Our priority is to keep their interests foremost in mind and we are already making plans and taking action to play our part.”

“Tonight’s vote has left us in uncharted territory. No deal would be a disaster for the UK and ignores the deep economic, human and legal links between the UK and the EU. For the architecture sector, projects continue to be put on hold as uncertainty damages the investment climate and many EU architects in the UK are still uncertain about their future.

“Given the urgency of the situation, the government and Parliament must, without delay, seek an extension of the Article 50 process to allow for a concerted attempt to reach a deal.

“To be weeks away from leaving the EU with no deal or alternative places businesses in an impossible situation. Our politicians cannot leave the public in limbo and business to sort out the situation – they must work together to end the uncertainty.”

“It’s been clear for some time that there is no majority in parliament for any path to Brexit. Those politicians leading us out have completely failed to articulate a coherent, practical and positive vision of the UK outside of the EU.

“Half of our staff here in London are exceptionally smart EU citizens from outside the UK who help make us the successful global business that we are, winning a Queens Award for International Trade in 2018. The ongoing rancour and uncertainty leaves them in continuing limbo and makes it very much harder to attract similar staff to maintain our global edge. It also depresses our business and many other highly successful practitioners in the wider construction sector.

“My personal view is that the original referendum was a badly conceived and irresponsible act. Its verdict, despite what many politicians say, was marginal and far from clear. So whilst I’m not in favour of referenda in general, I think the only appropriate course of action now is to delay Article 50 and put it back to the people with the option to remain.”

“Theresa May might well be dancing on a knife-edge but she’s brought construction to tango alongside her, too.

“Even now, the industry’s plight continues to take a backseat to the playground-like quarrelling of politicians. After nearly three years, we are still no closer to reaching a deal.

“The perverse outcome from last night’s demolition of the government’s Brexit plan is that we are simultaneously closer to two completely opposite outcomes – a toecurlingly bad no deal Brexit and no Brexit at all.

“The constant toing and froing might make for good political theatre, but it is starving UK construction of the clarity and confidence it so desperately craves.

The fact that thousands of the EU workers on whom British construction relies have already packed their bags for rosier prospects back home should long ago have served as a wakeup call to politicians.

“Until parliament as a whole forces the Government out of its Brexit cul de sac, this already exhausted industry has no choice but to expend precious energy juggling a range of different Brexit scenarios.

“Construction is resilient enough to deal with whatever the Brexit farce throws at it. But MPs will do well to recognise a painful stretch of stagnation is on the cards if they don’t pull their fingers out.”

“From a development perspective and in the immediate term, the result of last night’s vote was largely expected so the industry’s perception or preparations are unlikely to have fundamentally shifted overnight. The question of Brexit has loomed in the background for the last two years now and while it would be churlish to suggest that it is background noise, the truth is that it appears to have been a case of “business as usual” for the construction and real estate sector.

“While the continued uncertainty is clearly unhelpful, the inertia that would be caused by sitting back and awaiting clarification of the future would be much more damaging. We cannot afford to simply pull up the drawbridge and wait to see what the future holds.

“It is worth remembering that the UK real estate sector remains an attractive proposition worldwide and inward investment continues to pour in from parties for whom the Brexit process is one of many factors in their wider investment strategy, so activity levels remain strong as we await the outcome of negotiations. We are not seeing deals being held up while clarification is awaited or that have a Brexit break provision.”