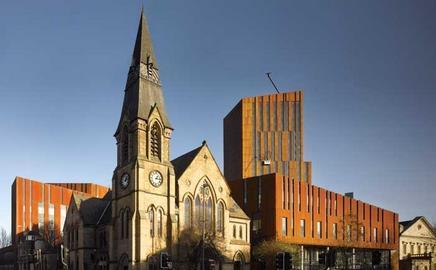 Times may be hard but the 2010 Building Awards are hosting another superb crop of entries for our project of the year awards. Competition to get onto the shortlist was fierce, so all the teams should feel proud their projects are showcased on these pages. We were looking for buildings that break new ground or are innovative in some way, buildings that are a joy to experience and buildings that simply look great. Although many of these schemes began in 2007BC (before the crunch) they also happen to reflect the times we’re living in: There are only two traditional offices; the rest of are museums, healthcare and educational buildings.

If you would like to be there when the winners are revealed, the awards are on Thursday 22 April at the Grosvenor House hotel in London. To find out more log on to events.building.co.uk/building-awards-2010

Broadcasting Place(pictured above) is 23 storeys of weathering steel placed on one of the Leeds’ highest hills. The tower, which twisting like a Rubik’s Cube as it rises, is student accommodation block for Leeds Metropolitan University. Two low-rise blocks at its base house the arts and humanities departments. All three buildings share the same Corten cladding and random-looking arrangement of windows. Actually, the windows were computer modelled to maximise natural light while keeping solar gain under control. Internally, the low-rise blocks are divided into flexible studio spaces and teaching rooms. They even integrate a Baptist church that was living in an old building on the site. A recent poll in the Yorkshire Evening Post declared Broadcasting Place the third most popular building in the city – and the most popular one that is less than 100 years old, which vindicated the team’s bold architectural approach.

Billed as developer British Land’s most sustainable building to date, this 56,000m2 office building in the City has a BREEAM “excellent” rating and a B-rated energy performance certificate. It is also the first building in Europe to achieve pre-certification for a LEED platinum rating. The building has an innovative facade that appears to be all glass but 60% of it is actually covered in solid panels to improve its thermal performance. Light is admitted through protruding areas of glazing that have been angled so that most of the sun’s heat is reflected away from the building,. This strategy cuts cooling loads 25%. The building is conventionally cooled but has a biomass boiler for heating and hot water. Tenants can specify their preferred type of cooling system.

The building is 20 storeys high but steps back in four stages as it rises. The steps have been used to provide attractively planted terraced areas. Using two integrated teams to deliver the project – Arup Associates and Mace – saved time and the building was delivered 5% more cheaply than predicted by the cost plan.

This is a bold project that involved flattening half of the existing Ashmolean and attaching a six-storey extension onto the grade I-listed 19th-century Cockerell building, thereby doubling the museum’s capacity.

Classical and modern link seamlessly. Visitors go through the grand entrance of the Cockerell building and into an atrium with a grand staircase spanning five floors. They then wander over link bridges spanning double-height galleries, glimpsing other parts of the collection through glass panels as they go. This provides a link between the collections – which run from Eygptian antiquities to 20th-century paintings – and helps visitors orientate themselves.

Internal space has been maximised in this height-restricted project by putting ventilation ducts in the walls rather than the ceilings and using display cabinets to form part of the walls. Externally, the Cockerell building is still the public face of the Ashmolean – but the hidden extension provides an exhibit in its own right.

Unlikely as it seems, Luton hosts the largest one-day carnival in the UK, so it’s only fitting that it should also be home to the country’s first building dedicated to the carnival arts. It provides everything from rehearsal spaces to business units for carnival specialists and an education centre that offers degrees in carnival studies. At the heart of the building is the “mas” camp, where people prepare the floats and activities for carnival. This is quite a secret activity so the building had to be flexible enough to accommodate different groups yet enable them to do their work in private. The building had to reflect the individuality and diverse nature of carnival, so it has a wide variety of surface treatments, ranging from bamboo to aluminium cladding.

Foster + Partners’ first hospital is intended to provoke a revolution in healthcare design. It has been built for Circle, a partnership of some 2,000 clinicians. Circle says the building is intended to put the idea of hospitality back into hospital, so it has modelled the building on a boutique hotel.

It is certainly boutique in scale, with just 28 beds, and is smart and business-like inside and out, with an added touch of domesticity. The central atrium feels like a modern take on the traditional drawing room and is intended to be friendly and welcoming. Consulting rooms are simple but finished with high-quality materials and have stunning views over the Somerset countryside. The bedrooms have wooden floors, ensuite bathrooms and mini herb gardens chosen for their use in traditional medicine. The business end of the building is reserved for the basement, although even this is different from a standard hospital as the operating theatres have windows.

Circle says the building isn’t just for private patients – NHS patients can elect to come here for some treatments – and it hopes to roll out more hospitals based on the same concept across the UK.

This building clearly draws inspiration from a nearby First World War tank training centre. The cladding fixings are a nod to the rivets used for tank construction and they’ve even managed to get ”tank” in the name. The building is intended to encourage innovation in small businesses, and includes offices, workshops and two conference areas. Shared spaces are bundled together and there is a courtyard to encourage interaction.

Sustainability was a big driver in the design, so the building has a green roof, high levels of insulation, solar panels and a closed-loop ground-source heat pump. Keeping the project on time and within the £7m budget was important for Lincoln council, so Marriott Construction, the contractor on the job, suggested a novel cladding solution to save money. This is Rockpanel’s Chameleon system, which changes colour depending on the angle of light falling on it; this gives the building an iridescent glow.

The Natural History Museum’s latest showstopper is an eight-storey, 65m-long concrete cocoon encased in a giant glass box. The cocoon is intended to raise the profile of the museum; it also performs its more traditional function. Like the real thing, it is intended to protect its contents from external predators – in this case, Anthrenus museorum, or the museum beetle. Given half a chance, this bug would munch its way through the museum’s irreplaceable collection of 20 million insect and plant specimens. These are housed in 3.3km of cabinets in an environment maintained at 17ÞC and 45% relative humidity – conditions that will prevent the beetles from breeding but aren’t too cold for the scientists working with the collection.

The cocoon is made from 235mm-thick sprayed concrete, which adds thermal mass to the structure so if the mechanical cooling systems fail it would take several days for the internal environment to warm up. The energy required for the dehumidification process is minimised by using the museum’s combined heat and power plant. The cocoon isn’t just for scientists – visitors can take a stroll through to see how specimen-collecting advances our understanding of the natural world.

This 50,000m2 office development makes the most of its Thames-side location. A 12-storey block sits back from the river with two low-rise blocks in front of it, on the river side. These have roof gardens that provide stunning views for workers. The building looks good, too: one of the two blocks has dramatic angled oak beams supporting brises-soleil and the other has striking timber louvres that track the position of the sun to control solar gain.

The building is partly naturally ventilated and has a 52kWp solar array on the roof. Minimising the environmental impact of materials was important to Sir Robert McAlpine, so 80% of the previous building’s foundations were reused, the use of hollow blocks reduced the concrete content used by 30%. Other concrete is made from 55% recycled elements. All these initiatives helped the building to achieve a BREEAM “excellent” rating.

Then there’s Housing, too

Here’s a quick look at the third category in the projects of the year section – the housing award.

The shortlisted schemes are: