Will virtual reality spark the BIM revolution we've been waiting for?

A revolutionary new technology using ‘mixed reality’ merges real and virtual worlds to visualise physical and digital objects co-existing and interacting. It is transforming the stairlift sector but its potential for the construction industry goes far wider – could it spark the BIM revolution we’ve been waiting for? 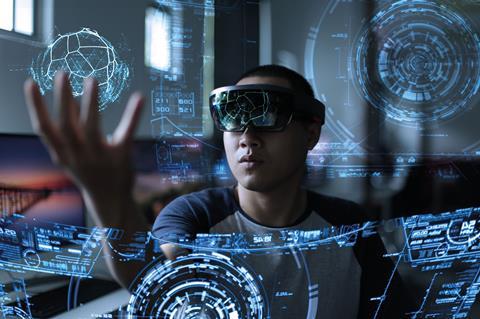 The Microsoft HoloLens is a self-contained holographic computer contained within a headset that produces a real-time holographic representation of reality on which a changeable, digital interface is overlaid. Already used for gaming, Skype and architectural visualisation, it can also be applied to construction

Virtual reality has been a familiar tool in the construction industry for some time now – but a relatively new variant of the technology looks set to make an equally significant impact. While virtual reality creates a digital environment that is a copy of the real world, with “mixed” or “augmented” reality the real and virtual worlds are merged together to produce a three-dimensional environment where physical and digital objects can be visualised co‑existing and interacting in real time.

Such techniques were predicted years ago by popular culture, in the dynamic user interfaces portrayed in films such as Minority Report. However, whereas once this technology was firmly in the realms of science fiction, it has now become a useable tool. As is increasingly the case with technology developments – including those that benefit construction – it is powered by 3D game engineering, a multibillion-pound entertainment sector that now makes more money than the film industry. Mixed reality also joins advancements in fields like cloud computing, machine learning and robotic automation that make up what is called “Industry 4.0”, the trend of automation and data exchange in manufacturing technologies.

One of the most significant recent examples of an augmented reality construction tool is the Microsoft HoloLens. The HoloLens is a self-contained holographic computer contained within a headset that produces a real-time holographic representation of reality on which a changeable, digital interface is overlaid. Whereas a virtual reality headset resembles a helmet, a HoloLens is less substantial and is perhaps more akin to bulky sunglasses (pictured). It has already been used for a number of gaming, Skype and architectural visualisation applications but one of its most recent and ambitious applications demonstrates the potential that this tool – and mixed reality technology in general – has to change the construction industry.

“If, as an industry, we are to deliver on the targets set in the Construction 2025 strategy, we need to be innovative in our thinking”

The installation of a domestic stairlift in someone’s home is often an emotionally taxing process, as the occupant reluctantly comes to realise that an accessibility device they do not want is one they might actually need. With an ageing population in much of the world – the number of over 60-year-olds on the planet is expected to double by 2050 – stairlifts may become an increasingly common adaptation in residential units of two storeys or more.

The usual process of installing a stairlift can be cumbersome. A client’s existing staircase would be measured manually, photographs taken and drawings subsequently produced. A bespoke stairlift solution would then developed, followed by the stairlift being manufactured, delivered to site and installed. The entire process from survey to installation could take up to two-and-a-half months and incredibly, each stairlift would require multiple drawings and details during development stages.

Crucially, during this time the client would only be minimally involved in the project and only able to visualise their specific stairlift design via two-dimensional drawings. These would only normally available some time after the initial site visit and survey.

Now imagine the timespan from survey to installation drastically truncated fourfold to just 14 days. Also imagine a fully digitised workflow process that enables manufacturing of the stairlift to begin even before the end of the initial site survey visit. Picture too a means by which during that initial visit, both client and engineer are able to visualise a digital reproduction of the final stairlift design and make any alterations deemed necessary in real time.

The solution is delivered by a new HoloLens application that has been developed in conjunction with global lift and escalator manufacturer Thyssenkrupp. The HoloLens produces an instant 3D digital twin of the existing staircase with all dimensions already measured via a smart point survey. While the HoloLens claims precise accuracy with its measurements, these can be cross-checked with more conventional laser measuring tools.

A CAD file is generated concurrently with the model. 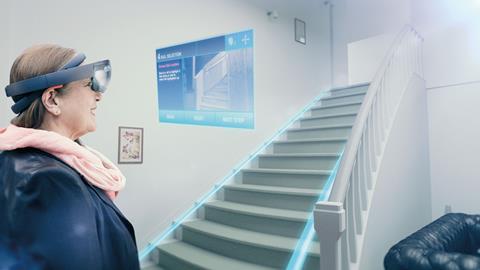 The HoloLens application produces an instant 3D digital twin of the existing staircase, enabling the client to visualise the stairlift and cutting design and installation time by 75%

The twin model is then exported to a tool known as a solution app. The app uses the existing staircase parameters to enable the engineer to design the key customised element required for stairlift installation, the stairlift rail. Consequently, the stairlift rail can then be designed in full accordance with the physical constraints set by the existing stair as recorded in its digital twin model. During this stage, the customer can view the developing design through the HoloLens and instantly customise elements such as colour and upholstery.

Once a new model incorporating the existing stair and new stairlift has been agreed, this can be immediately exported to the sales team, who create a detailed bill of materials and confirm price. Once agreed with the client, the finalised model can be digitally exported to the factory and construction of the stairlift rail – the most important component of the stairlift in terms of its interaction with the existing stairway – can begin right away. Throughout the entire process, all data is constantly backed up to the cloud.

Understandably, Thyssenkrupp is keen to extol the virtues of this new tool and, as chief executive Andreas Schierenbeck explains, the company sees it as an essential component in the future of their business model. “It’s four times quicker than the existing process, it enhances customer experience, it radically improves the quality of visualisation and it marks a giant leap in the ongoing gamification of the design and manufacturing process.”

But though undeniably important, stairlifts are a relatively compact and self-contained niche within the consumer market. The broader question is: what wider effect will this new tool have on other applications within the construction industry? According to Thorsten Herrmann, general manager of commercial enterprise at Microsoft Germany, its impact is already being felt.

“We’re increasingly seeing this kind of immersive, augmented reality technology being used in services and logistics. It’s proving useful in terms of cabling and co-ordination of plant and in early identification of clashes and future mistakes. But so far we’re seeing a bigger uptake in non-construction industries like aviation and automobiles.”

Schierenbeck continues: “In many ways, we’re tired of waiting for the construction industry to catch up with other industries. This kind of technology is reliant on the type of data available, and all too often the data in construction isn’t good enough. We’ve been promised the BIM revolution for the past 10 or 15 years but it still hasn’t fully happened yet.”

But beyond stairlift installation, mixed reality applications such as those described in the staircase scenario could one day serve a wide range of other construction applications. In conjunction with related developments in the fields of artificial intelligence, open source data, prefabricated assembly and the general digitisation of workflow heralded by BIM, this could dramatically expand the opportunities data workflows present.

There are already a number of new applications using this technology. SmartReality is an augmented reality mobile app that uses the mobile phone’s camera to overlay an interactive BIM model over printed construction plans to create three-dimensional visualisations of projects. Pair and Akri are other phone visualisation apps that use augmented reality technology to allow three-dimensional models of fixtures and furnishings to be dragged and dropped into existing 3D BIM models.

The DAQRI Smart Helmet has also been developed and had been described as a “magic hat” that allows architects, builders, engineers and designers to walk through a construction site while having the BIM model superimposed over the existing surroundings to create a fully immersive, full scale 3D-environment. Skanska was the first UK contractor to trial DAQRI. Thomas Faulkner, executive vice president of Skanska UK, says that it – and the capability offered by the wider mixed-reality technologies – could transform how the industry works.

“If, as an industry, we are to deliver on the targets set in the Construction 2025 strategy, we need to be innovative in our thinking. It is highly configurable and can utilise many different types of project data, expanding the possibilities for project teams and clients alike. It has the potential to help save time, cost and carbon.