The consumer price inflation rate dips into negative territory on a single-month basis for the first time in recorded history. Michael Hubbard of Aecom reports

Building costs increased in the year to Q1 2015 by 1.9%. Labour cost inflation led to most of the yearly increase.

The rate of annual change at Q1 2015 remained constant at 1.8%. Labour cost inflation contributed more to the yearly increase, but with some contribution from materials too.

The electrical cost index rebounded in Q1 2015, increasing by 2.1% over the year. The index mirrors changes to metals commodities prices recorded over Q1 2015.

The consumer price inflation (CPI) rate was just 0.1% at Q1 2015. On a single-month basis, though, CPI dipped into negative territory for the first time in recorded history in April 2015.

Price Adjustment Formulae indices, compiled by the Building Cost Information Service are designed for the calculation of increased costs on fluctuating or variation of price contracts. They provide guidance on cost changes in various trades and industry sectors - i.e. those including labour, plant and materials - and on the movement of work sections in Spon’s price books.

The 60 building work categories saw an average decrease of 0.4% on a yearly basis. Higher rates of change were seen in the following categories:

The All Work material price index fell by 1.5% in the year to March 2015. Housing sector materials recorded inflation in March at just 0.1% over the year. Mechanical and electrical services materials also showed little price movement in the last 12 months. Falling metals commodity prices have made a primary contribution to this benign price environment for M&E related materials. Again, housing sector materials displayed stronger signs of any price inflation over the year, rather than disinflationary trends observed in the non-housing and repair and maintenance sectors.

The annual rate of consumer price inflation fell to -0.1% in April 2015. This is the first time in recorded history, and since 1960 using comparable historic data, that this measure of inflation has turned negative.

While input prices fell annually to -11.7% in April, the pace of price deceleration dropped from a low of -14.1% in January 2015. Core input inflation, which excludes volatile items, posted -3.1% over the year, which was similar throughout Q1 2015. Crude oil and imported metals disinflation contributed towards the annual change in input prices. Sterling’s strength also accounts for lower imported commodity prices in the last year.

Factory gate prices continued to fall in April 2015 on a yearly basis, now 10 months successively. Output prices during Q1 2015 did level out, actually rising 0.1% between March and April, though the yearly metric remained firmly negative. The core index, which is narrower because it excludes items such as petroleum and food, increased just 0.1% in the year to April. 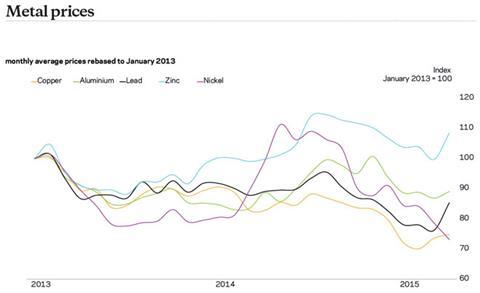 Although price falls across metal commodities continued into Q1 2015, copper, lead and aluminium saw some reversals in these trends. Zinc also followed suit with a price rebound, as closure of two large zinc mines introduced concerns that supply might be lower in the near-term. But other pricing factors for zinc appear to counteract this supply constraint narrative. 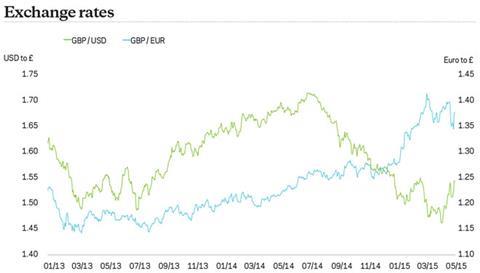 Sterling’s long appreciation against the Euro ended in Q1 2015. Despite retaining most of its strength against the Euro, sterling sought a level around the 1.35 to 1.40 range in recent months. Similarly, the US dollar’s climb against sterling was halted towards the end of Q1 2015. Sterling has since recovered some ground against the US$, posting a recent high of US$1.57 in mid-May.

The parties to the Construction Industry Joint Council have agreed a new pay deal, which saw pay rates increase by 3% from 30 June 2014, and a further 3% rise from 29 June 2015. Travel and fare allowances also increased from 30 June 2014, along with subsistence allowances increasing to £35 a night from 6 January 2015. The agreement also addressed changes to sick pay.