Labour costs continue to be the primary driver of building cost inflation in last year’s final quarter, with a mixed picture still for building materials

Building cost index
A composite measure of building costs increased over the last 12 months by 0.8% at Q4 2015. This is a slowing rate of increase, although labour costs continue to be the primary driver of building cost inflation, with a mixed picture still for building materials.

Mechanical cost index
The rate of annual change at Q4 2015 picked up slightly at 1.0%. This is a moderate increase from that recorded in the previous quarter. Despite continuing declines in the prices of metals commodities, labour cost inflation contributed most of the annual increase.

The chart below shows Aecom’s index series since 2005, reflecting cost movements in different sectors of the construction industry and consumer prices. 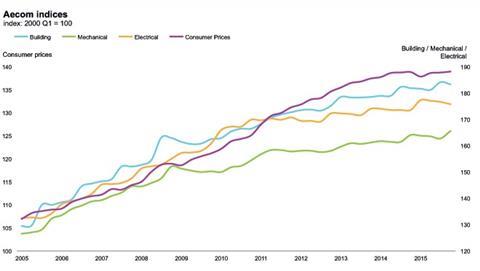 Price Adjustment Formulae indices, compiled by the Building Cost Information Service (previously by the Department for Business Innovation & Skills), are designed for the calculation of increased costs on fluctuating or variation of price contracts. They provide guidance on cost changes in various trades and industry sectors – including labour, plant and materials – and on the differential movement of work sections in Spon’s Price Books. The 60 building work categories recorded an average decrease of 0.54% on a yearly basis. Higher rates of change were recorded in the following categories:

Construction industry
The All Work material price index fell by 3.0% in the year to January 2016. Housing-related materials dropped by 1.7% over the last 12 months. Non-housing materials prices also fell over the year, declining by 3.4%. Mechanical and electrical services materials prices extended their slide too.

After languishing at or near 0 through 2015, the annual rate of consumer price inflation picked up at the start of 2016. Base effects are likely to have contributed to some of this rise, along with smaller falls in fuel prices compared to the same time last year. Forecasts for CPI remain below 1% over the near-term.

Although input prices fell on a yearly basis up to January 2016, the annual rate of change slowed notably to -7.6% from an average of -12% during Q4 2015. Crude oil and imported metals led the declines by a significant margin. Core input inflation, which excludes volatile items, recorded -4.7% over the year.

Factory gate prices declined further at -1.0% on a yearly basis, marking 19 consecutive months where prices fell. But the pace of falls slowed at January 2016, when -1.4% was recorded in December 2015. Again, it was petroleum-based products that contributed the largest movement in the annual rate. The core index, which is narrower because it excludes items such as petroleum and food, recorded no annual change in the year to January 2016. 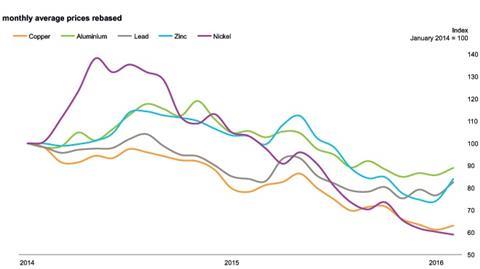 Although still negative on a yearly change basis, the pace of price declines slowed through Q4 2015 and into the new year. Removal of some supply in major metals production halted the slide for prices, which began in late 2014. But price levels generally at Q4 2015 are still significantly lower than those seen at the start of the year such is the fall in prices. There is a view that price trends may have bottomed out, although an immediate bounce-back is not a high probability just yet. Efforts to curtail over-capacity across the globe for metals and other commodities may provide a floor for prices, as low prices will force out over-capacity in production, which should be one component in helping to move prices back up. In this sense, based on the laws of supply and demand, low prices may yet be the best cure for low prices. But what happens in the global economy will still act as a fundamental determinant of demand-side issues and corresponding price changes.

After following divergent paths up to early 2015, the Euro and US dollar tracked a similar trend out of 2015 and into 2016. Much of the momentum behind sterling weakening against two of its major currencies pairs results from the pricing in of potential outcomes of the UK’s forthcoming EU referendum. Whatever the outcome, sterling is likely to be impacted in the lead up to and immediately after the referendum. Also likely compounding this trend has been a further market acknowledgement of the state of the UK’s finances and related structural issues, and additional strengthening of the US dollar after the Federal Reserve’s decision to increase its bank rate.

Construction Industry Joint Council
The parties to the Construction Industry Joint Council agreed a pay deal which saw pay rates increase by 3% from 30 June 2014, and a further 3% rise from 29 June 2015. Travel and fare allowances also increased from 30 June 2014, along with subsistence allowances increasing to £35 a night from 6 January 2015. The agreement also addresses changes to sick pay.

Joint Council Committee of the Heating, Ventilating and Domestic Engineering Industry
A 3.0% increase in hourly wage rates came into effect from 5 October 2015. The daily travel allowance also increased by 3% from 5 October 2015. Amendments to the basic working week also applied from 6 October 2014, as the number of hours per week reduced from 38 to 37.5. Changes to the level of weekly sickness and accident benefit are also planned.

The BATJIC rates of wages effective from 29 June 2015 are: