Aukett says regional market on the up 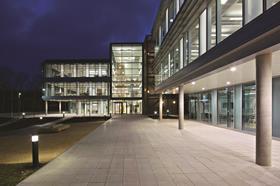 Speculative office development outside of London is on the rise again, according to architect Aukett Fitzroy Robinson.

Developers have been reluctant to press ahead with office schemes without tenants in place throughout the economic downturn, but in a statement to the city this morning Aukett Fitzroy Robinson said the mood was changing.

It said:  “We have  seen the re-emergence of office developers proceeding before securing pre-lets in the UK regional market.

“We currently have instructions in a number of regional cities including Birmingham, Cambridge and Reading which, along with schemes at planning in Bristol and Norwich, have in excess of 1.1m ft2 space and an approximate construction value of £150m.”

It said the upturn had resulted in an increase in the firm’s top-line revenue and staff numbers.

Aukett Fitzroy Robinson will report its full results for 2012-13 in January 2014.