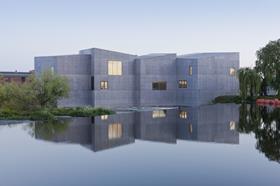 David Chipperfield Architects has reported a 95% nosedive in pre-tax profit in its latest accounts.

In accounts filed at Companies House, David Chipperfield Architects reported a pre-tax profit of just £57,777 in the year to 31 December 2012, down from £1.2m the year before.

The firm’s revenue also fell, though less dramatically, to £9.8m from £10.2m over the period.

Writing in the accounts founder of the firm David Chipperfield offered no explanation for the fall in profit but said there had been “investment in office infrastructure”.

He added: “Looking ahead the principle aim remains winning good quality, profitable work that is spread throughout a range of geographical locations and sectors which avoids exposing the business to exceptional levels of risk.”

Chipperfield is currently working on a £1bn mixed-use development for Cambridge University and the £600m Elizabeth House development at London Waterloo for Chelsfield and London & Regional Properties.