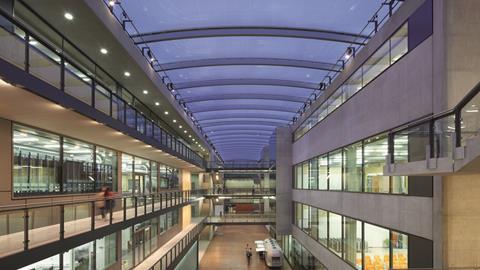 Public Building Project of the Year

The new University of the Arts is the starting pistol for the huge King’s Cross Central regeneration project, and on the evidence of this first completed building it promises great things to come. Central St Martin’s first consolidated campus is a virtuoso mix of new and old and harnesses the robust, industrial heritage of the site to mesmerising effect. A gaping chasm-like atrium is formed between a Victorian warehouse and the new college building, while the college itself is a magisterial yet nuanced rendition of the Victorian utilitarian virtues of employing simple geometries to attain monumental character.

Hewitt Studios’ charismatic extension to Hereford College of Arts has transformed the way in which the college is used and given it a new public face and image. The double-height multi-function foyer provides cafe, reception and exhibition space.

Wakefield’s cultural rebirth continues apace with one of last year’s most eagerly anticipated cultural openings. The dramatic weir-side location of the Hepworth, entered into this category by Turner & Townsend, is optimised by being seemingly marooned on the River Calder.

Interserve Construction’s Endeavour Unit in Middlesbrough offers a simple yet dynamic example of modern healthcare design. Its modest size is crucial in helping to de-institutionalise the hospital.

Consarc Architects’ iCon sets out to prove that sustainability can be sexy. Its remarkable carbon footprint of 12.2kg CO2/m2 per year is accompanied by a confidently crafted architectural character.

At its heart, the Riverside Museum by Zaha Hadid is a powerful and poignant ode to Glasgow’s great shipbuilding past. The building acts as a giant zinc funnel that channels visitors from the city at its entrance to the magnificent view of the River Clyde.