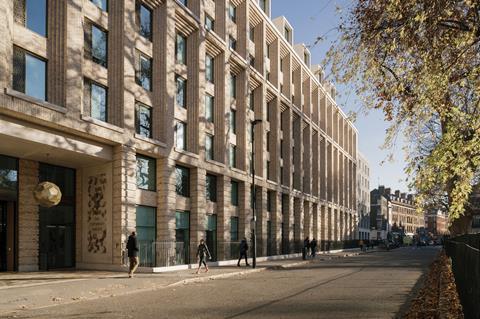 Designed by executive architect TP Bennett in collaboration with facade architect Maccreanor Lavington, the £140m Garden Halls project provides the University of London and the University Partnership Programme with a 59,831m2, 1,200-room halls of residence. Design work began in 2012 and the team had to deal with both an inflexible schedule and the issue of designing in a conservation area. The use of off-site construction enabled solutions to both problems.

“This scheme stands way above the crowd aesthetically,” the judges commented. “It is absolutely stunning, with beautiful architecture of the highest quality. They have managed to deliver a functional building in an efficient way, truly embracing off-site technology.”

Chapter Lewisham is a privately funded student accommodation-led mixed-use development in the heart of Lewisham town centre in south London. It comprises 611 bedrooms arranged in two 12-storey blocks, with commercial premises and facilities for the students at ground level. In total, 303 of the rooms are contained within studio flats with cooking and washing facilities. The scheme received planning permission in late 2015, making the use of off-site construction essential if the building was to be ready to accept students for the start of the 2016/17 academic year.

The Gasholders London project in King’s Cross comprises 145 apartments in a series of three cylindrical structures, each sitting within the constraints of cast-iron Victorian gasholder rings that were previously part of the capital’s largest gas works. Having deployed off-site techniques on other buildings on the wider King’s Cross development, SES was engaged on the Gasholders development from an early design stage by contractor Carillion and developer King’s Cross Central Partnership. The circular nature of the buildings added an extra challenge, something that the off-site techniques helped resolve.

According to Portakabin, it would have taken up to two years to build the Global Academy using traditional methods of construction. The use of off-site construction, on the other hand, enabled it to be delivered in just a year. Cost savings were generated as a result of reduced waste, reduced preliminaries and fewer defects needing to be put right. In total, 112 modules were installed in three weeks to create two, four-storey wings. The structures were water-tight within four months, meaning that the majority of the time was spent on fit-out.

London City Island Phase 1 comprises 561 mixed-tenure apartments in four blocks of 14-40 storeys. The site occupies the lower part of the Leamouth Peninsula and is almost entirely surrounded by a loop in the River Lea. The demands of the build programme and the logistical issues imposed by the site made off-site construction an obvious choice. The developer chose to make use of the Hurks sandwich panel system to produce high quality wall panels using a traditional full brick facades while speeding up the build programme.

With the Lynch Hill Enterprise Academy, the client chose to use off-site construction to improve quality and speed up the build, in addition to finding an eco-friendly solution that would ensure the building was as future-proofed as possible. Through early engagement, McAvoy Group managed to secure a 5% reduction in build costs through a value engineering exercise. As a direct result, the school was able to buy two IT suites that it would not otherwise have been able to afford.

Arup’s challenge was to expand Pinewood Studios, thereby supporting the UK film industry for the next 50-100 years by providing a 100,000m2 studio development. The fact that the site is located in a noisy environment – it is adjacent to the M25 and under Heathrow flight paths – was an additional challenge. By using off-site techniques the team was able to deliver significant cost and build programme savings compared with previous phases of the studio’s development.