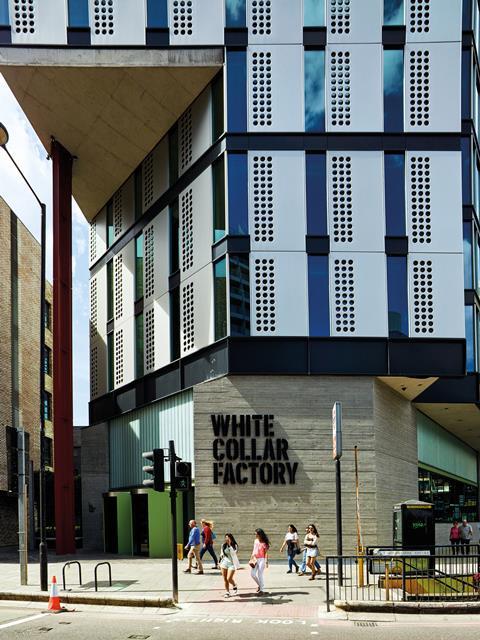 Over the past year architectural practice AHMM has completed several key projects, including the redevelopment of Television Centre in White City, London, and Liverpool’s Royal Court, as well as the White Collar Factory in London’s Old Street (pictured). Meanwhile UK fee income rose 14%. With offices in London and Bristol as well as one in Oklahoma in the US, the firm’s continued success has been underpinned by a maintained focus on the infrastructure and management of the practice. Client satisfaction is constantly monitored throughout the project delivery process, both formally and informally, while staff wellbeing and training remain high priorities for the firm, which this year became an employee ownership trust.

The practice has worked on an array of residential projects in the past year, including at Blackhorse Mills in Walthamstow, and secured planning for Clockhouse and Access House, part of the Bromley-by-Bow South masterplan. It saw profit rise 10% and has boosted staff numbers to 89, with 19 new recruits. It has expanded its wellbeing activities and continues to reward its team with benefits including sabbaticals and early Friday finishes.

With profit up by 16% in the past year, Shoreditch-based BGY has opened a new office in Bristol, while projects have included a proposed revamp of the Truman Brewery complex in east London, with other projects under way in Italy, Spain, Turkey, Sweden, Thailand and Germany. The firm focuses on developing staff skills and supports workplace wellbeing, having boosted its range of employee benefits and engagement initiatives, including supplying graphics for a float in the London Pride parade.

UK profit more than doubled last year as HLM worked on healthcare projects as far afield as Abu Dhabi and, closer to home, the Royal Hospital for Sick Children in Edinburgh. HLM created the UK’s first Architecture Apprenticeship Standards, collaborating with the RIBA, the Architects Registration Board and more than 12 UK universities. It has an in-house method for project reviews, carried out at key milestones, while formal reviews are carried out with clients at agreed intervals.

In the past year the London-based practice has worked on the first phase of Manchester airport’s £1bn transformation, the new Dyson School of Design Engineering at Imperial College London and the development of 13 Crossrail stations. It is committed to incorporating sustainable solutions, having in the last year designed four BREEAM, four PEARL, three LEED and two GRIHA rated projects. UK fee income rose 19% while profit grew 60%.

The practice has worked on UK healthcare and education projects such as Wick Community Campus and Northumbria University’s Student Central, while overseas schemes featured a 1,500-bed student residence for the University of British Columbia in Canada and the West Kowloon Cultural District Authority headquarters fit-out in Hong Kong. Staff engagement policies include enhanced parental leave, sabbaticals and international team trips, while it has also developed its professional practice curriculum to include leadership skills such as negotiation and delegation.

Weston Williamson saw profit rise by 63% last year, with work including the start of the Melbourne Metro Tunnel – the largest ever public transport project in the state of Victoria, Australia – as well as securing its first major aviation project in North America, a regional transit centre and passenger processing facility at Toronto Pearson international airport. It also launched the WW+P Incubator, a collective of young architects, to respond to briefs that specifically call for emerging architects.

WIA saw UK fee income rise by 28% in the past year, with profit growing nearly one-and-a-half times, as it worked on projects including the Westminster Quarter, South West Lands phase one at Wembley, and a science building for Queen Mary University of London. The Belfast-based firm embraces a team culture of client, consultants and suppliers working together, and has been expanding its client base while continuing to export its services and compete in the London/UK market alongside more established firms.