This year AKT II has completed multiple projects in the UK, Europe and the US, including the Vessel at Hudson Yards, the Dorothy Garrod Building at Newnham College, Cambridge, the Neuron Pod for Queen Mary University of London, Generali Tower in Milan and the Stirling prize-winning Bloomberg HQ in London. The firm’s success over the past year has led it to open three new offices, in Manchester, Cambridge and Copenhagen. Repeat business accounted for 75% of work in 2018/19 – up from 70% the previous year. 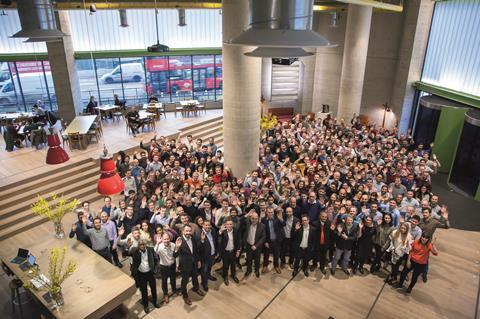 Two Aecom projects were in the running for the Stirling prize this year: Bloomberg’s new HQ in London and Storey’s Field Centre and Eddington Nursery, Cambridge. The firm also had a key role on the Serpentine Pavilion. In the past year Aecom has applied manufacturing techniques to housing, education, healthcare and commercial buildings. It has worked with several repeat clients, including Nottingham Trent University, with which Aecom has a research partnership.

In the past year innovation has been a major driver for Atkins. At Hinkley Point C it used a fully integrated 3D model to design the reinforcement for the new power station structures. Atkins’ commitment to improving building performance is highlighted in its own buildings as well as in its designs for others. An example is its new office in Epsom, which has building performance at its heart.

Big-ticket projects over the past year include Tottenham Hotspur’s new stadium, where the firm helped create a sliding grass pitch for Premiere League football that opens to uncover an artificial pitch for NFL matches – the first of its kind. The consultant has also been working on design structures that achieve low-carbon performance in operation for bodies including the Greater London Authority.

Over the past year Chapmanbdsp has gone through a major rebrand and pushed forward into new markets. The consultant has moved into a new London office, where it has hosted events for the British Council for Offices, the UK Green Building Council, CIBSE and the London Festival of Architecture. The business has also expanded into Saudi Arabia. It has increased its work in the leisure market and has also developed a student accommodation portfolio. The firm completed the Centre Building for London university LSE within the past year.

Liverpool-based consulting firm Curtins has seen its headcount increase by almost 10% from 389 last year to 420. In the past year the firm was one of 20 housing specialists selected by Homes England for its new multidisciplinary framework. Curtins also worked on the regeneration of the former BBC site in Manchester into mixed-use development Circle Square. In the past year 75% of Curtins’ clients have been from existing partnerships.

Davies Maguire has grown its staff, revenue and client base year-on-year over the past 12 months. As part of its work on Google’s new London HQ, the firm has developed a ground retention scheme that speeds up basement construction compared with traditional cross-propping schemes. Davies Maguire now employs more than double the industry average of female engineers and 40% of its staff are non-UK nationals.

Multidisciplinary engineering consultancy Harley Haddow’s work has continued to be underpinned by its extensive experience in the refurbishment of complex, often listed buildings. Over the past year it has worked on schemes including the refurbishment of the BAFTA headquarters in London, the Edinburgh Printmakers building and the Royal Botanic Garden Edinburgh. The firm has seen its repeat business grow from 51% to 62% in the past year.

Mott MacDonald has focused on winning and delivering more work with a smaller number of clients over the past year. In 2018 the firm launched a new operating arm, Mott MacDonald Digital Ventures, which brings together engineering heritage and technology knowledge. It provides a range of services across the whole of the project lifecycle. In the last year 1,500 responses from clients gave Mott MacDonald an overall satisfaction rating of 81%.

In 2018/19 Ramboll has seen work from repeat business hit 90%, up from 83% in 2017/18. The company is on 42 frameworks, including for 10 universities, Transport for London, the British Antarctic Survey and the Falkland Islands government. Ramboll saw its staff numbers hit 1,074, meaning the firm has grown by almost 10% over the past three years. Its projects include creating a viable space for Microsoft’s first European store in London.