Enterprise Centre: A plan is thatched

The £11.6m Enterprise Centre at the University of East Anglia is one of the most innovative green buildings in the UK. But for its prefabricated cladding, it relies on the region’s most traditional building method 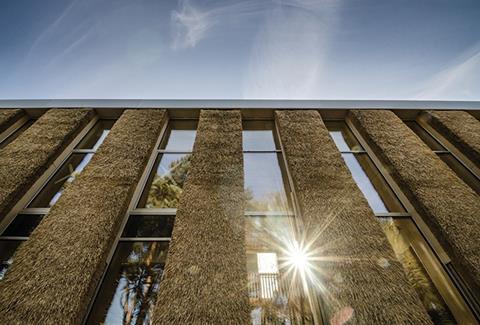 When one thinks of thatch, the mind is drawn to pastoral images of idyllic cottages and rustic barns. This is particularly the case in the broads and fenlands of eastern England, where thatched roofs are an intrinsic part of historic vernacular architecture. But one scheme in Norfolk has sought to dramatically reinterpret this traditional building material within a contemporary, prefabricated context. Moreover, it has used this innovation to help craft a building with record-breaking environmental credentials.

The £11.6m University of East Anglia Enterprise Centre is located on the UEA campus just west of Norwich. It is intended to encourage students to interact more closely with business by providing an innovation lab, a 300-seat lecture theatre, flexible workspaces, teaching and learning facilities and amenities to help foster collaboration. 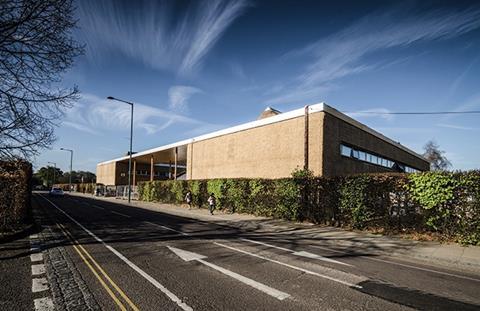 The centre is being built by Morgan Sindall and is scheduled for completion later this year. Yet already the building is aiming to meet several highly impressive sustainability objectives. These are BREEAM Outstanding, Passivhaus, an exemplar low carbon building, locally sourced materials, renewable energy sources, three years post-occupancy evaluation (upon completion) and 100-year design life-cycle. 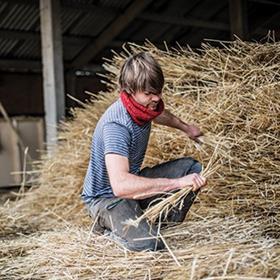 The two-storey building, which has been built on an “E” plan to admit as much daylight as possible, will contains two principal off-site construction elements: its cladding and its glulam timber structural frame. Both play an intrinsic role in helping the building deliver its environmental aims but it is arguably the pioneering cladding system that represents the greatest innovation. This is because the building is wrapped in prefabricated and vertically hung thatch panel cassettes, a system that the design team believes is a world first.

“Vertical thatching is not new,” points out Morgan Sindall senior design manager Stuart Thompson. “Although it’s not familiar to this part of the country, it’s certainly been used in places like Holland. But the use of prefabricated thatch panels constructed off site and as part of a unique cassette cladding system is the first of its kind anywhere in the world.”

The thatch cassette system was developed by Morgan Sindall and project architect Architype. Architype project director Ben Humprheys describes it in the following terms: “The thatch concept was a way of explicitly identifying this as a low carbon project that uses locally sourced materials. It’s a way of using a traditional material in a modern, prefabricated way.”

The panels were built in local thatchers’ barns across Norfolk, with each timber cassette module filled with straw, which was tightly bound together. The modules were then transported to site and erected onto the building’s timber-frame facade as a rainscreen cladding.

There are 294 panels in total, covering approximately 1,200m². Each panel varies in size, with most measuring about 3m x 1.2m, and between 250mm and 300mm thick. The cassettes are fixed by means of an interlocking system, which means that damaged panels can be easily replaced but must be removed as part of a sequence. Significantly, the panels sit beyond the building’s airtight and insulation line and do not form part of its structure - Thompson describes them as a “duvet which wraps the cold side of the building”. 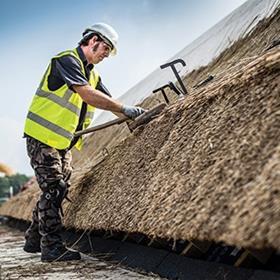 Despite being an ancient building material, thatch has excellent insulation properties, is naturally waterproof, has a long lifespan and of course is derived from natural materials.

Thompson also says there were multiple programme and technical advantages associated with constructing the thatch panels off site. One of the obvious benefits was the avoidance of the health and safety issues presented by the traditional thatch construction process of teetering precariously on a pitched roof or ladder. Off-site construction also made quality control a much more rigorous process, with each cassette being meticulously examined at close range before completion.

Each panel just took four hours to construct, presenting obvious programme advantages. And, in a development particularly welcome in wet and windy East Anglia, constructing the cassettes in barns provided protection from the weather and enabled prefabrication to proceed through the winter months, all of which facilitated the kind of programme certainty rarely seen on thatched construction.

Thompson reveals that he was particularly keen to use thatch because, “like reed, clay, chalk, timber and hemp, it is a material strongly associated with local vernacular”. However, the system used at the Enterprise Centre does incorporate some contemporary variations. For instance, local thatch is usually held together with reed. But, according to Thompson, “reed would have been too slippery, so we used straw instead, which provides a firmer grip”. 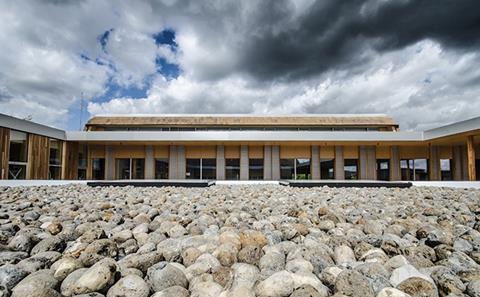 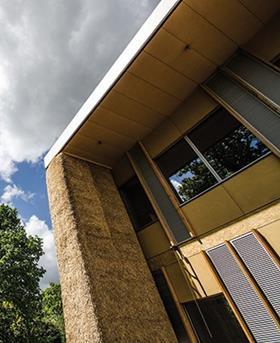 A bespoke jointing detail was also devised to ensure that the individual cassettes could securely interlock while providing a visually smooth and continuous thatched surface on the facade.

These kinds of innovation are a result of a rigorous appraisal process undertaken at the start of the project that helped to identify the off-site construction process as the preferred route. Weight, size and detailing issues were explored to ensure that the innate highly insulative and carbon-negative properties of thatch could be used within a practical and efficient modern construction system.

Thompson is happy with the results. “What’s great about the cassette system is that it’s based on standardised design details that are now easily repeatable on other projects. It’s also created a modern way of utilising a traditional building method and material. Moreover, it’s helped protect a traditional craft, and the prefabrication element ensures that modern quality control and health and safety standards can easily be applied to it.”

With relish, Thompson points out that one of the thatchers involved in the project has used his experience to establish his own thatching school, which will teach these modernised skills to a future generation.

The final major element of the project that was constructed off-site was its structural timber frame, which comprises glulam beams and columns as a natural counterfoil to the thatch cladding. Here too opportunities to burnish the building’s sustainability credentials were embraced. 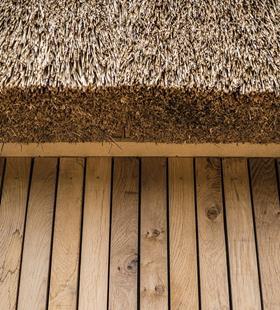 The thatch is complemented by other natural materials such as timber

Clearly timber frame is a viable low-carbon product. But the problem the design team found was that most UK structural timber frame is sourced abroad, which would have severely compromised the project’s local-sourcing ambitions.

Was local sourcing then an option? Yes and no. Thetford Forest is located just 30 miles away from the site but, like many English forests, its native Corsican Pine and Douglas Fir trees are not grown for structural timber and therefore lack the required densities. Moreover, the Forestry Commission, which sells the wood commercially, does so by auction, a transaction method the contractors felt uncomfortable with.

However, by collaborating closely with the local supply chain, as well as the BRE and structural engineers BDP, Morgan Sindall was able to sort, condition and grade the Thetford timber and use it to construct the building’s frame. The wood was kiln-dried in Ireland and then shipped back to the site before being assembled as individual consoles on site.

Thompson says this drive to use locally sourced materials characterised the entire project. His only regret was the concession of kiln-drying the wood in Ireland but, as he reveals, this need not be a problem on future projects. “The only reason we shipped the timber to Ireland was because there were no appropriate kiln-drying facilities locally. But I’ve since found out there are and I discovered it at my child’s birthday party of all places! Another parent mentioned he owned one nearby. So next time round we could be even more efficient.” 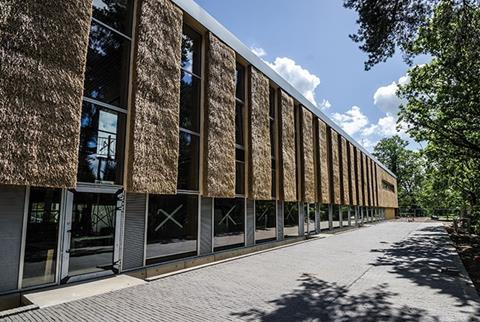