Rem Koolhaas shows unusual restraint and impeccable bedside manners at Glasgow’s second Maggie’s Centre, where a subdued and informal space uses the natural world around it to promote healing 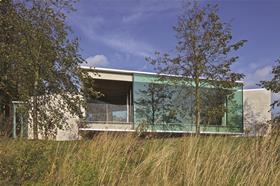 Radical Dutch architect Rem Koolhaas has completed his first building in the UK. Glasgow’s Gartnavel Maggie’s Centre is the latest in the string of personalised palliative cancer care units first established in Edinburgh in 1996 after the death of Maggie Keswick Jencks, wife of the renowned post-modernist architectural theorist Charles Jencks. Like its predecessors, Gartnavel Maggie’s continues the organisation’s tradition of promoting progressive and highly distinctive modern architectural design. Previous centres have attracted stellar architects like Richard Rogers, Zaha Hadid and Frank Gehry, so it comes as no surprise that one of the most celebrated international architects of the past 30 years has now produced one of his own.

What may come as a surprise is just how different this particular Maggie’s Centre looks to what we might normally expect a Rem Koolhaas building to be. Pritzker prize-winning Koolhaas, working as part of the Rotterdam-based Office for Metropolitan Architecture (OMA) practice he founded in 1975, has established a
well-earned reputation for provocative, free-thinking and futuristic reinvention. Straddling genres and wilfully defying stylistic classification, his work - such as the perilous CCTV HQ in Beijing and his seminal book S,M,L,XL - displayed a visceral brand of aesthetic experimentation and visionary conceptualism that wowed a generation of architecture students and transformed modern architectural theoretical debate.

One then might expect Koolhaas to summon a blistering invocation of his uncompromising signature style for his first completed building on British shores. Think again because this is one of the most subtle, subdued and serene buildings Koolhaas has produced to date. 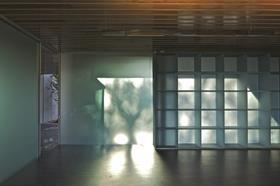 Like all Maggie’s Centres, this one is located beside a hospital, in this instance Glasgow’s gloomy Gartnavel. Koolhaas’ building is perched on the edge of a small, wooded hilltop that offers generous views over the city beyond the hospital to the south but a more secluded, overgrown landscape on all other sides, particularly to the north.

The building is single-storey and conceived as a series of splayed, interlocking and irregular rectangles arranged around a small courtyard. The outer walls of the in-situ reinforced concrete frame are formed by full-height panels of either concrete or glazing, both of which provide a sculpted, minimalist feel. The bold emergence of this crisp, angular pavilion against its wooded backdrop is stark and intriguing and provides the first glimpse of the powerful relationship between built form and natural landscape that is such a critical part of this building.
Appropriately perhaps, it is internally where the architecture really comes into its own. The approach adopted by Maggie’s Centres is primarily based on intimacy and informality and the building skillfully expresses this in several ways. First, there is a notable lack of a reception. In fact, the area that makes the most prominent impact upon entry is the kitchen to the side, bathed in daylight from its full height windows that thrust grand cityscape vistas right into the heart of the interior. 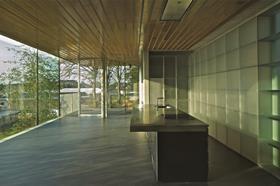 Chunky full-height resin storage units are also visible, backlit to stylish effect and compounding a palpable sense of intimate domesticity. The entire building almost feels more like a house than a care centre, a commendable achievement that chimes perfectly with the Maggie’s communal and informal approach.

Materials too are cleverly deployed to reinforce a sense of homely reassurance and calm. Exposed concrete walls provide a smooth, honed finish to the interiors and manage to remain cool without being oppressive. Sliding walls, forged from lusciously pale lime timber provide a vivid, softening contrast. Ceilings comprise poured concrete set around narrow beech planks, fashioning a crafted, man-made feel. And one of the counselling rooms is completely encased in curved strips of solid elm, creating a sunken, womb-like interior oozing with a sense of warm enclosure and organic calm.

Internal spaces are arranged as a circuitous route through the “doughnut” plan. There is also a huge amount of flexibility, with practically every wall capable of sliding noiselessly away to enable spaces to flow into one another. Multiple glass walls also create transparency throughout. The result is an incredibly dynamic plan which, for a small building, unleashes a stupendous array of constantly shifting axes, spaces and views.

This embedded complexity is both dissembling and utterly compelling and constantly provokes drama and surprise. Walking the circuit through the building feels like slowly unravelling the pieces of a shattered glass cog glued imperfectly back together. Distorted reflections, oblique views, shifting transparencies and in one memorable instance, a fully mirrored wall create a giant, luminous camera obscura of endlessly morphing spaces, shadows and silhouettes.

There is a purpose to all this: the healing process itself is never a straight path and by aping its unpredictability, the architecture is gently expanding the realm of the possible. It is a subtle tease but an incredibly emotive one. 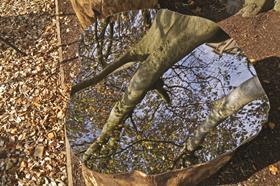 But perhaps the most powerful trick up Koolhaas’ sleeve is an even simpler one: nature. This is a building seamlessly folded into the landscape. The garden courtyard provides the most ostensibly organic gesture; surrounded by sliding panels and glass walls, the garden hurls itself into even the deepest crevice of the building like a gaping green orifice of repose.

Subtly shifting floor levels enable the building to evoke the staggered topography of the site. The public areas, such as the kitchen are situated to the more open south side of the centre.

However, the northern side sees the building embedded below the rising ground plane so that the more private areas for counselling and contemplation are quite literally wrapped into the surrounding landscape in a comforting embrace.

This potent relationship with nature is the most effective tool in giving the architecture such a powerfully human, tranquil aspect. It also symbolises the very humble restraint and understatement that characterises the entire building. This engagement with nature is arguably at its most vivid in the most unlikely of spaces, the “womb” counselling chamber and the toilet. A roof-light is cut into the ceiling of both and the glowing silhouettes of fallen autumnal leaves are softly visible through the frosted glass. It is a poignant metaphor for the primal design concept, so subtly realised, of a calming, healing sanctuary entombed deep within a wooded garden.