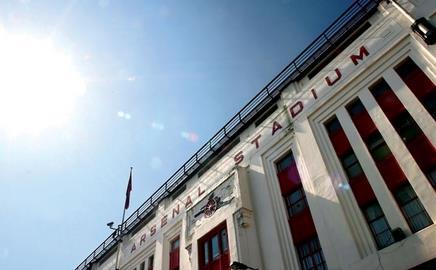 Doors and windows As the old Arsenal stadium is transformed into luxury flats, one firm has been charged with the job of removing, refurbishing and reinstalling hundreds of windows on the famous art deco facade. Stephen Kennett finds out how it is going

The faded “Arsenal red” paintwork is the clue that the dozens of window frames stacked up in the store room of Steel Window Service and Supplies’ north London base come from the old Highbury stadium. In their current form, the rusted and peeling frames look a sorry state, but by the end of the year they will be better than new.

After 93 years as a football stadium, Highbury is being developed by Arsenal FC into more than 700 high-specification apartments, some of which will incorporate the grade II-listed, art deco facade of the former east stand. It is SWS’ job to bring the thirties windows, originally made by Crittall as part of its Universal range, up to scratch.

So, how do you take a 75-year-old window and transform it into something in keeping with an apartment that could reasonably retail for £500,000. At the moment SWS is in the middle of this painstaking process, which has involved redesigning the glazing and devising a way to control ventilation, in addition to removing and reinstalling all 163 windows. All being well the work will be completed in the autumn.

The process began in January, when the first frames were carefully removed. Each window was dismantled and stamped with identification numbers. Back at SWS’ premises, the ironmongery, including the original bronze pivot cups and spring catches, was taken off, bagged and sent for chemical stripping to remove any paint and polished to reveal the base material.

While this was happening the frames and components had the old glazing putty and bedding mastic removed before being grit-blasted at the firm’s factory, to get rid of any decorative finishes and corrosion. They were then blasted with a weldable, rust-inhibiting, red primer for short-term protection from corrosion while they were being stored and transported.

At this stage SWS takes stock. It inspects the frames for defects and to make sure they are square and straight. “Overall they’re not too bad,” says Michael Harris, estimator and surveyor with SWS, “but it’s lucky that not all of them have to be put back in.” The extra frames will be used to provide donor sections for those that are beyond repair.

The first big challenge for SWS was the glazing system. The original single-pane windows were internal putty glazed and had a U-value of about 5.7W/m2K – near the limit of what can be achieved with single glazing. Although the client did not set a specific target, it was keen to see this upgraded.

Overall the frames are not in too bad a condition, but it’s lucky that not all of them have to be put back in.

To do that SWS is replacing the windows with double-glazed units. These comprise two 4mm clear panes of toughened glass, with a 3.2mm argon-filled space. The combined glass and frame has a U-value of 3.7. Darren Joyce, director of SWS, says this could have been lower, but the budget didn’t allow it – cost rises significantly the thinner the glazing is.

A thicker, 14mm double-glazed unit was tried in the mock-up stages. This was 70% cheaper but there were aesthetic and technical issues. “The windows had quite a small rebate and you would have seen the spacer bars,” says Joyce. “This would have been undesirable from an aesthetic point of view and, more importantly, if spacer bars are exposed to ultraviolet rays, they break down over time and the seal between the panes of glass gets broken.”

The other issue was how to provide controlled background ventilation. The planners would not allow trickle vents to be incorporated into the window heads. Instead, a new, purpose-made, two-hole spring catch – one for the shut position and one for slightly ajar – was devised for the horizontally pivoted windows. “We experimented with a number of options but this was simple, unobtrusive and cost-effective,” says Harris.

The double-glass units were then packed into the glazing rebate with setting blocks and bedded with clear silicone. Narrow, clip-on steel beading, finished in the same colour as the frames, replaced the original putty. Finally a silicone draught-proofing system was applied to all the opening windows, which will make one of the biggest differences to the acoustic and thermal performance and air-tightness of the windows.

SWS’ job is not over once it has installed the refurbished windows. It also has to install replica windows below the first floor level, the design of which is going through the approval process at the moment.

To try and match the originals, Crittall’s W20 range may be used. The fenestration pattern of mainly marginal pane, pivoting lights will be matched, but the more modern glazing allows enhanced draught stripping, 16mm double-glazing with a centre pane U-value of 1.2W/m2K and a combined frame and window U-value of 2.2.

The future of steel windows?

Steel windows have been around for more than 100 years and have found favour with architects owing to their slim profiles and strength. But the continuing tightening of the Building Regulations is limiting their application. Darren Joyce of SWS says it could be the death of steel windows in
new build.

Joyce says they are working on a number of technologies to try to reduce this, but so far they are just nibbling away at the overall U-value.

Manufacturer Crittall is working on a thermally broken hollow section, however this has much larger and prominent sight lines.