There was a time long ago when Halloween had a deeply sacred and spiritual relationship with architecture. In the early Christian church and even today in much of the Catholic Latin world, All Hallows Eve was a solemn moment to remember lost loved ones and commemorate the brief lifting of the veil between the human and spirit worlds. Anyone who has been lucky enough to visit the wedding cake majesty of the Iglesia Todos Santos in Cuenca, Ecuador, or marvel at the mosaic splendour of Holy Souls Chapel in our own Westminster Cathedral cannot fail to be struck by the awe and beauty with which architects once responded to the haunting sceptre of the afterlife.

However, those times are past. Today Halloween has been firmly parked in the much safer and commercially malleable territory of plastic face
masks and supermarket confectionery.

But, consumerist pop culture aside, architecture can still be relied on to serve up ghoulish horrors of its own. So if you’re feeling brave, take a look at these frightening buildings from around the world, and count yourself lucky that for you Halloween comes round just once a year and isn’t a permanent nightmare … 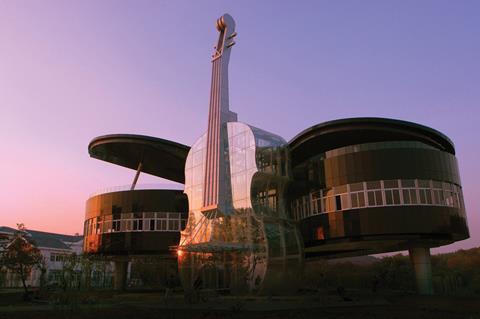 Literalistic, kitsch buildings have taken a critical beating since the heady days of eighties and nineties post-modernism, when literally anything from a postage stamp to an eyebrow was fair game for an architectural concept. However, a group of students from a prominent Chinese university are clearly intent on reviving this strand of late 20th-century culture and have designed a musical performance studio shaped like … a grand piano and a violin.
Most architecture students’ projects end up on a wall. But this being China, this one was actually built, complete with a glazed “violin” atrium and a roof terrace inserted under the strung-back “lid”. Critics may sneer but the 50:1 scale pavilion has proved a hit with locals and tourists alike and scores higher in the amusement stakes than on the terror factor. One can only hope that plans are afoot to build an extension in the shape of a pianist. 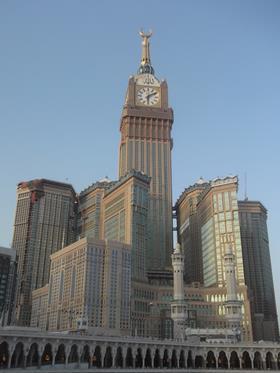 What do you get when you mix Big Ben, moral turpitude and bucketloads of cash? No, not an MP’s expenses claim but what is in fact the second tallest building in the world. Quite simply, this 120-storey mega-tower is the World’s Most Significant Building You’ve Never Heard Of. Clocking in at a staggering 601m, it is five times bigger than Big Ben and twice the height of the Shard. Costing an eye-watering £9.3bn, its seven towers also contain the world’s largest floor area, and its clockface, inevitably the world’s biggest, is the centrepiece of a delusional Saudi attempt to wrest the prime meridian away from Greenwich.

Impressive as these statistics are, they are all fatally undermined by the fact that the building appears to have been designed as a dystopian joint venture between Madame Tussauds and Batman. But worst of all, it has been built right beside the Kaaba in the Masjid al Haram, the holiest site in Islam. Imagine a genetically enhanced Vauxhall Tower rising up beside Jerusalem’s Church of the Holy Sepulchre with the world’s biggest Ladbrokes as the anchor tenant and you get the picture. 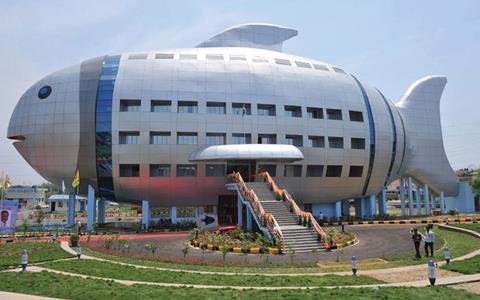 Is it a bird? Is it a plane? This building is so bad it could quite easily be both. India has a long and shameful history of buildings designed to look like anything from musical instruments (Chowdiah Memorial Hall, Bangalore: guitar) to the solar system (Indira Gandhi Planetarium, Lucknow: Saturn). But this recently opened piscine aberration plummets new depths. If the warped cladding, incongruous staircase and moronic concept weren’t bad enough, according to Indian Agriculture Minister Sharad Pawar, the £2.3m offices was actually conceived to “increase [India’s] share of fisheries exports in the world market”. Pawar’s straight-faced commendation is to be applauded for studiously avoiding all direct references to ministerial resignations or architectural prosecution. However, Pawar and company may not be off the fish-hook just yet. It is not just Indian taxpayers and local residents likely to be irked by this armour-plated aquatic apparition, Disney may well be aggrieved too. The animated film giant is hard at work on a sequel to the £550m grossing 2003 classic Finding Nemo. They needn’t have bothered, he’s in Hyderabad. 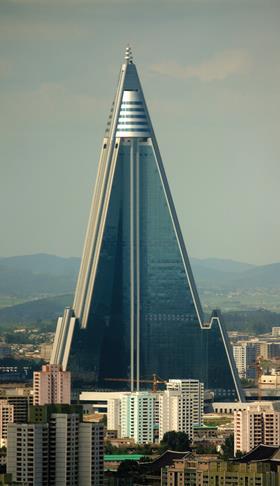 Quite what North Korea is up to with this monster is anyone’s guess. Nicknamed the “Hotel of Doom” by aghast locals, work on the 105-storey mega-pyramid began in 1987 but stopped in 1992 when funds, and presumably national sense of humour, ran out. Construction resumed in 2008 but with the interior still little more than a concrete shell, no completion date is in sight.

The state-backed 330m tower was conceived by the government to project national wealth and prestige but is unlikely to achieve much other than the complete annihilation of North Korea’s infinitesimal tourism industry. At least communism gave the Russians nice tube stations. What with baby-faced dictators and illiterate London 2012 flag bearers, one would think the embattled citizens of the world’s last true communist state already had enough on their plates without having to contend with the daily threat of being pulverised by the demented progeny of a Thunderbird and the Exorcist. Horrific. 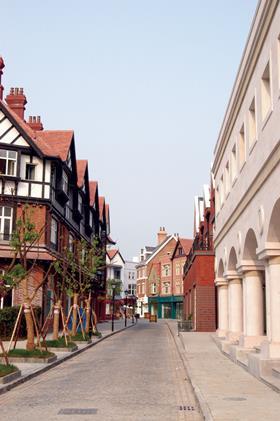 Depending on your cultural proclivities, Little Britain will either be a charming medieval alleyway in the City of London or an acerbic TV comedy sketch show. But think again, because it also lives and breathes in a new suburb 19 miles south-west of Shanghai.

Even in a country with expansionary instincts as rapacious as China’s, Thames Town still beggars belief. The £200m, 1ha settlement had been designed to house 10,000 in an exact replica of a “classic English market town”, complete with red phone boxes and mock-Tudor buildings, although presumably lacking youth unemployment and a Greggs. The architects’ desperation to refute the obvious theme park analogies proved unnecessary - high prices and a polluted river have done a good job of keeping pretty much everyone, apart from intrepid newlyweds and wedding photographers, away.

With its sycophantic pastiche and Truman Show-esque artifice, Thames Town is unmistakably a keen student of the Las Vegas school of architecture, the critical difference being of course that Vegas doesn’t take itself seriously. It does prove however that the corrupting influence of Sin City can embarrass English architecture as well as princes.