As the place of study for what is potentially the most groundbreaking scientific discovery in manufacturing of recent times, it seems fitting that the construction of Manchester’s National Graphene Institute should be a testament to modern science itself 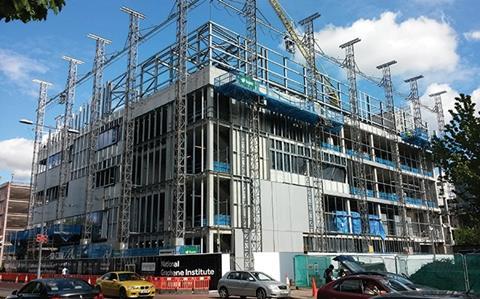 You may not have heard of graphene yet, but it is being heralded as potentially the most revolutionary material invention since plastic. Graphene is a pure carbon compound that is virtually transparent and completely flexible. At only one-atom thick it is also the thinnest material ever created. Yet it has 200 times the strength of steel and 1,000 times the electrical conductivity of copper wire. With potential applications ranging from facade cladding to bendable digital screens, graphene has the potential to revolutionise how we make things and live in the 21st century.

Although scientists have been aware of “graphite oxide” since the mid-19th century, graphene was first produced under laboratory conditions in 2004. This landmark breakthrough was made by two Nobel prize-winning physicists from the University of Manchester, professors Andre Geim and Konstantin Novoselov.

As a result of their discovery, the material has become the focus of a multi-billion pound international research industry. Understandably, Manchester University is keen to emphasise its pivotal role in the development of a material that has potentially world-changing possibilities.

So that is why the university is developing a £61m state-of-the art facility dedicated to the study, research and development of graphene and its applications.

Bam Construction is building the National Graphene Institute (NGI) to a design by architect Jestico + Whiles. Construction began last June and is scheduled to complete next spring. When it opens, the facility will provide 7,800m² of accommodation over five levels, including highly-serviced ultra-high-spec clean rooms and research laboratories, as well as more conventional offices, social and seminar space.

The clean rooms are fitted out to International Organisation for Standardisation (ISO) standards 5 and 6, and exceptionally the building will also contain a clean lift - one capable of maintaining laboratory conditions between two clean rooms on different floors. 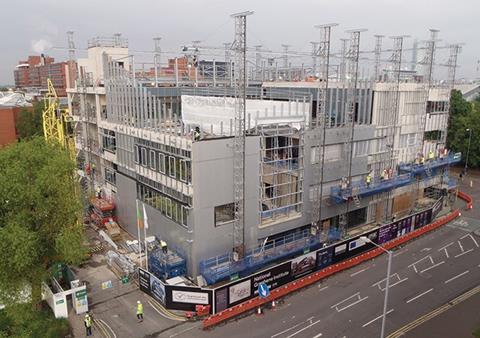 ISO standards 5 and 6 are commonly requested for the nanotechnology applications used by companies like Intel, but this level of technical specification for a UK university is virtually unprecedented.

Two key aspects of the building’s construction are a result of the highly-sensitive experimental work that will take place within it.

First, the building comprises not one but two, structurally independent, structural frames. The smaller contains plant equipment and is known as the service utility block while the second houses the principal laboratory accommodation. Although both frames are contained within the curtilage of the building footprint and enclosed under a single roof, they are acoustically separated to prevent vibration from travelling from the plant areas and disrupting the highly sensitive experiments taking place under controlled research conditions.

As a second measure to minimise vibration the building retains almost twice as much mass as it needs for its required structural loading. Rebar within its concrete frame is up to 30mm thick and floor slab depths vary from 320mm to a hefty 1,000mm. The structural frame alone took six months to build, almost half the full 67-week construction programme.

As Bam Construction’s construction manager Tony Grindrod explains, “Achieving the massive frame was one of the biggest challenges of the project. The structure is not overdesigned but it needs the mass to achieve the vibration criteria. The vibration control has pushed the structural design towards a heavy concrete frame.” 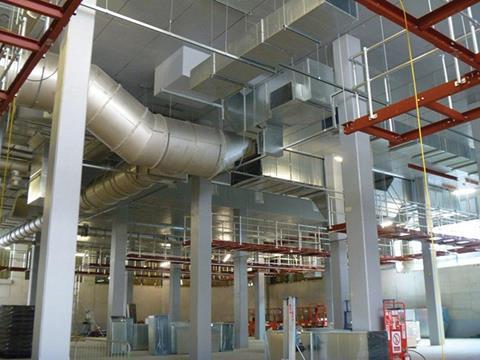 Construction began when the site, on a prominent corner within the University of Manchester campus, was cleared and excavated to below what is now a basement slab, approximately 5m below ground. A continuous pile wall with capping beam was then placed around its sunken edge to act as a retaining wall.

A ground-bearing concrete raft slab on block foundations was cast in situ on the bedrock to form the basement floor. Both retaining wall and floor slab were isolated to minimise vibration. For the same purposes the basement slab is 600mm thick under the building’s main structural frame and a full 1m thick under the service utility block.
The twin in situ reinforced concrete frames themselves rise from the basement slab. Each is separated from the other by a 50mm isolation joint, which runs the full length of the building, structurally splitting it in two. Only service penetrations and the roof straddle this joint.

The concrete frame is maintained throughout the building and will be exposed in some areas with a high-quality finish. Stainless rather than ferrous steel is used where the frame requires it, to prevent interference with the sensitive electromagnetic equipment to be stored in the building. This rigour will continue in the rooms’ fixtures and fittings - even steel drawer castor runners in sensitive areas will be non-ferrous.

The clean rooms, which will form the heart of the institute’s work, are on the lower-ground and first floor levels. The basement clean rooms have a raised access service floor that sits about 1m above the basement slab. An accessible plenum forms the ceiling of the basement room and occupies much of the ground floor. 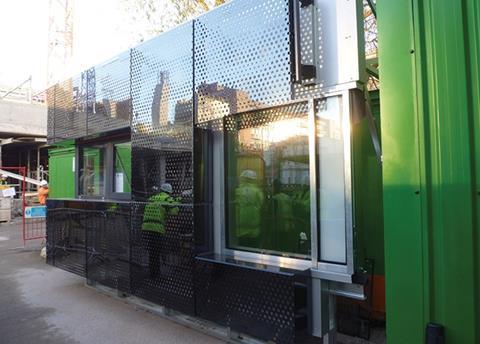 The smaller, secondary clean room sits above this on the first floor. A clean lift linking the two areas has an integrated fan filter to maintain positive air pressure, temperature and humidity levels, so researchers do not need to “de-gown” while moving between the two spaces.

The first and second floors also contain laboratories and offices, while the third contains a large seminar space that opens on to a terraced section of roof. The oof above the third floor is fitted with photovoltaics and has further plant raised on a steel platform and screened by the “veil” that forms the building’s external skin.

The black perforated stainless steel veil shrouds the entire building and will be etched with a full height representation of the chemical formula for graphene. The outer veil is formed by perforated black Rymex stainless steel cassettes that are hung on a carrier rail system. This system is fixed to an inner leaf of Eurobond cladding which is hung from the building’s concrete frame. 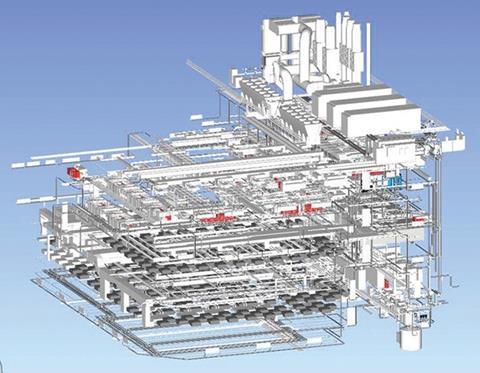 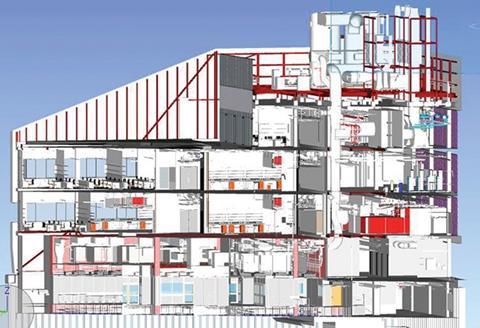 M&E requirements within the building are complex and onerous. Its specialised function means it is highly serviced and almost half the construction budget has been spent on mechanical and electrical installations.

As well as the clean rooms’ plenum and the huge amount of equipment within it, both clean and research rooms require an extraordinary array of gas and chemical supply to carry out the graphene research. These supplies include nitrogen, helium, oxygen, saline, clean dry air, pressure-cooled water and specialised pure water. This is in addition to standard inlet and outlet flows for hot and cold water, conventional gas and electrical power.

Not surprisingly, Grindrod also identifies other key challenges on the project as the “scale and sophistication of the institute’s M&E systems, as well as delivery of the high level of technical specifications required for the clean rooms”. Even circulation had high mechanical specifications as prefabricated service racks were slotted into ceiling spaces beneath floor slab soffits. 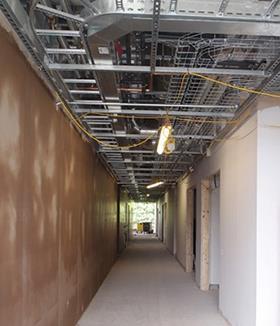 Prefabricated services decks are slotted into the corridor ceiling spaces

These onerous service requirements demanded a level of precision and accuracy that the design team maintains would have been virtually impossible to achieve without the use of BIM. A forensically-detailed BIM model of the building was developed before and during construction and Grindrod insists it has been an indispensible resource in securing speed, efficiency and early clash detection within M&E apparatus.

BIM will also play a role in the facilities management of the building once it is complete, another BIM asset that Grindrod views as critical in such a highly-serviced building. The BIM model will be used to monitor the condition of the key mechanical plant, providing an essential maintenance schedule and ensuring it does not impede the critical work of the institute.

Once the National Graphene Institute is complete next spring it will doubtless provide a world-class facility for the study of one of the 21st century’s landmark inventions. We may be some way from actually constructing buildings from graphene, but the extreme technical and mechanical discipline evident in the institute’s construction provides a base for a material whose own composition has already set the benchmark for scientific wonder and innovation.