Pretty bubbles in the air 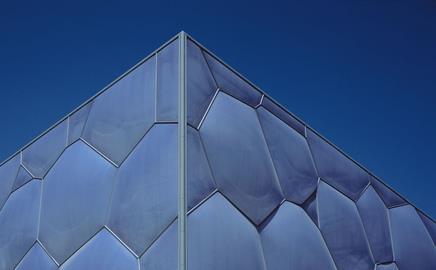 The Water Cube, as the 2008 Olympic aquatics centre is known, is the largest ETFE-clad building in the world. And, as it nears completion, its vast bubble-wrap exterior is already the talk of Beijing.

In Beijing, talk is focusing on the national aquatics centre rather than the Olympic stadium next door. Dubbed the Water Cube because of its rectangular shape, the home of next year’s Olympic swimming events looks neat and formal compared with the avant-garde extravagance of its neighbour, the Bird’s Nest. What has got people talking is the fact that the centre looks finished – on the outside at least – and that it is clad in ETFE.

“It looks more finished than anything else around it, and the Chinese have never seen ETFE before,” says Marlow Brauer, a photographer who spent nine days shooting on site. “I think that is what draws all the interest. It catches the light and changes throughout the day.”

The Chinese may not have seen the stuff before, but they now have the largest ETFE-clad building in the world. More than 100,000m2 have been used to clad the Water Cube. The temperature of swimming pool environments must be carefully regulated, so the centre had to be completely clad, unlike the exposed structure of the Olympic stadium.

The structure of the Water Cube is every bit as exciting as the Bird’s Nest: it is based on the geometry of soap bubbles. This unusual solution was chosen because it proved impossible to make conventional vertical columns in the walls, and beams in the roof look neat where they meet in the corners. It looks satisfyingly organic and, despite its random appearance, the soap-bubble structure is repeatable, which makes it easy to build and to make earthquake-proof. ETFE “pillows” are fitted to the soap bubble-shaped structural steel sections and, when inflated, create three dimensional “bubbles”.

When the Water Cube is completed at the end of this year it will be able to house 17,000 spectators and after the Games it will become a permanent centre for aquatic sport.

1 and 2 Internally the Water Cube is split into two areas. The first will be used for the main Olympic events and is still having work done on the internal structure, so it is still full of scaffolding (picture 2)

3. The second half is further advanced, so is clear of scaffolding. This will be used by the public, and the sunken area at the bottom left hand side of picture 3 will contain a wave machine. The space next to the round columns will contain viewing areas

4 The exterior is clad with ETFE and a second skin of ETFE is used internally – a space frame forms the structure and separates the two skins. This cladding solution means the building acts like a greenhouse, keeping the pools and interior warm. The ETFE was installed by abseilers

5 Construction work is very labour intensive. Here scaffolding being dismantled is passed along a human chain. Despite the high temperatures inside the Water Cube – which regularly exceed 45°C, the labourers work very quickly. Most come from the countryside and are keen to save up so they can go home and invest in their farms. However, by Western standards wages are still very low

7 Another significant project taking shape is the Rem Koolhaas-designed CCTV building, which will house China’s main TV agency. A cranked link will eventually connect these two angled towers at the top

8 Workers stay close to the site in these temporary site huts where conditions are basic. There are up to 15 people in each unit and no running water

9 Beijing is undergoing a construction boom that is very American in feel, with neat-looking freeways scything between anodyne tower blocks. Now China is more economically liberal, the cult of individualism is emerging in unlikely places: architects regularly post huge pictures of themselves on the hoardings around sites

10 The ETFE catches the light of the sky, so is constantly changing colour