The big squeeze: 5 taxes that could affect your business 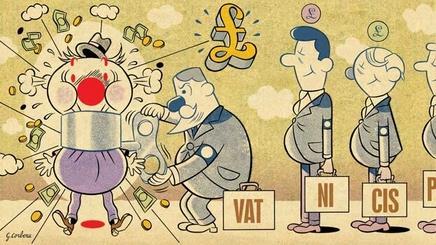 It’s no secret that the government is looking through old suit pockets and putting its hand down the back of Downing Street sofas to find money. This year, the total amount of tax HM Revenue and Customs forecasts that it will take in is £41bn less than last year (£439bn for the year to 31 March 2010 compared with £398bn). Corporation tax income will be slashed even more dramatically, by £10bn, from £43bn in 2008/09 to £33bn in 2009/10.

So, whichever government is in power after the election will be looking to squeeze as much money from as many sources as it can, including smaller construction firms. Here we identify five new ways it will be trying to do just that in the months ahead – as well as a few ways of limiting their impact.

The Time to Pay scheme was brought in a year ago to grant extra time to businesses struggling to pay their tax. According to HMRC, about 60% of these extensions are for three months, and 18,500 companies have taken advantage of it (including 1,295 from the construction sector).

Nick Hood, executive chairman of insolvency specialist Begbies Global Network, says HMRC is making it more difficult for firms to use the scheme. “My worry is that, whatever HMRC says, this scheme is winding down. We’re hearing it’s tougher to get into and getting a second deal is nigh-on impossible.”

A spokesperson for HMRC denied the scheme was being toughened up or wound down. He said: “We’re not going to agree to an arrangement automatically – we will at least do a little bit of background research on firms asking for Time to Pay. Where people are coming to us a second time we’ll ask additional questions – for instance, we will ask what else they’re doing to pay their debts.”

Liz Bridge, secretary of the Joint Taxation Committee, which includes the UK Contractors Group, says HMRC has got tougher, but not unreasonably so. “It objected to people using the tax system as a bank, and it found it was supporting people who had the money to pay, so now it requires evidence of how hard up you are.”

Either way, it seems clear that businesses are less likely to be able to count on Time to Pay. Ron Thompson, who runs Thompson Gray, a consultant in Scotland with 20 staff, says: “I haven’t used the scheme but it was good to know it was there; it was a comfort for a relatively new business like ours.”

As you are doubt aware, the VAT rate returned to 17.5% at the beginning of January, but many commentators believe that whichever government wins the election will raise it to 20%. Hood says: “VAT rising to 17.5% will have a marginal impact, but if it goes up again, the impact will be much bigger.”

Indeed, it would be a killer blow, says David Westwood, a £1.2m turnover builder in Essex. He says: “Cutting it to 15% was not a big enough incentive to translate into more customers for my business. I know this because nobody has been bothered about getting work finished before the 15% expired – it’s peanuts to my clients. But if it goes up to 20%, it’ll be tough. I’ve lost £200,000 extensions to competitors because they gave a discount for cash, whereas I do everything above board. Now the temptation to use non-tax-paying builders will be even greater.”

He adds that it is difficult to say exactly how much work he might lose if VAT does go to 20% but says he lost at least three jobs in 2009 to “cowboys” willing to work for cash.

Employers’ National Insurance contribution is going to be 13.3% from 6 April, a rise of 1.5%. Employees’ NI will rise by half a per cent to 11.5% at the basic rate and by 1.5% at the higher rate. The chancellor’s pre-Budget report in November announced a further 0.5% hike for employers in 2011.

The effect of all this is to increase the cost of employing workers, and therefore the savings to be made from not employing them. Clive Lewis, head of medium-sector issues at the Institute of Chartered Accountants in England and Wales, says: “This makes it more expensive to hire staff, so it’s a disincentive to taking people on. It’s not good to penalise people for taking people on because it means more unemployment.”

Thompson says: “This will really bite. It will definitely put off anyone who is thinking about hiring someone. For us the recovery is happening in fits and starts – things will improve, then there’s another dip – and little things like hikes in NI are exactly what can stop you getting out of a dip. It really feels like the government isn’t helping much now.”

From April, HMRC will also be getting tough on the late payment of the Construction Industry Scheme (CIS) and PAYE. Until now, if firms made these payments late, HMRC could remove their “gross payment” status and take the tax from the contractors that employ them, greatly increasing the difficulty of getting rebates: a £750,000-turnover building business that had its gross payment status removed last year waited nine months for HMRC to repay £15,000. Now if you pay late you will be given one free life, but after that you will be fined 1% of the debt for each of the next three late payments. After that the fine rises one per cent every three months, reaching 4% for the 11th missed payment.

Ken Tracey, commercial adviser at the Electrical Contractors Association, says: “They have introduced this just as people are feeling huge pressure from the downturn. It’s particularly tough for smaller firms working for larger contractors that are delaying payments and constantly undervaluing their work. It really is the last thing people need now, and I would expect the government to be helping our members at a time like this.”

You will be obliged to do your VAT returns online from April and there will be penalties for anyone who doesn’t. Bridge says: “There will be a difficult transition period for many people. As they cease to get paper returns, people may think that if they haven’t received anything in the post then everything is okay. They may not realise they have to do it online – and that’s going to get them into trouble.”

Also, she warns against avoiding sending in your return altogether, something which she believes is on the rise. “Many small firms will realise they cannot pay and so they will not send a return at all. This is a mistake, because you will be penalised for paying tax late and you will be penalised for failing to send your return. These penalties will start at 5% of the tax owed, then rise to 10%.

How to survive the taxman’s onslaught