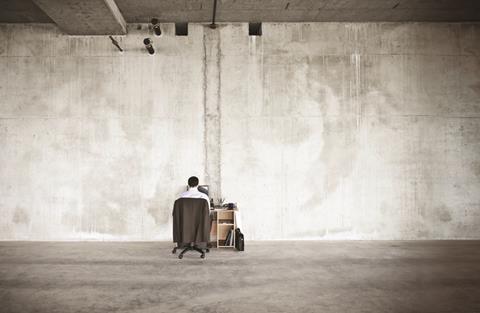 As little as 10 years ago the popular conception of the office of the future was a high-tech, high spec work environment jam-packed with all the latest and most sophisticated IT equipment and technological gadgetry. The upper echelons of the London office market in the boom years of the last decade provide a clue as to where many presumed the sector was heading with gleaming, bespoke and very expensive office buildings offering everything from desktop ambient temperature monitoring to conference rooms with switchable glazing that morphed from translucent to transparent at the flick of a switch.

And then the recession happened and as with all recessions, revision followed quickly in its wake. So much so that at the start of this year financial consultants Deloitte published a report that envisages a very different outlook for office buildings of the future. In an effort to improve economic viability within the commercial sector and keep maintenance and construction costs down, the report’s authors now envisage an alternative future where offices actually become less sophisticated environments with significantly reduced building specifications, less reliance on integrated IT infrastructure and growing utilisation of cheaper residential construction techniques.

Of course these changes are not justified in economic terms alone; they are validated by the enormous cultural shifts recently wrought by the growth of digital technology and social media. The authors maintain that the ever-increasing popularity of technical innovations such as wi-fi, the internet, cloud technology and mobiles, as well as the huge processing power now contained in most personal smartphones, laptops and tablets has created an environment where “the distinction between work and personal technology is blurring” and more emphasis is placed on the device rather than on the workplace.

Add to this ongoing changes in working practices prompted by the increasing pursuit of flexibility, such as the growth of hot-desking, home working, part-time working and temporary office hire, and the traditional office, in both layout and usage, increasingly becomes a conceptual construct rather than a physical one. It would be ironic indeed if the office of the future, in visual appearance at least, looked less like the slick computerised super-pods of the noughties and more like the lean Spartan workplace shells of the fifties.

Of course our perception of the future is always relative to how we comprehend the present. This is why a 1969 edition of the BBC’s former flagship technology programme Tomorrow’s World depicted an office of the future that looked suspiciously like a 1969 office with slightly more emphasis on robotics and automation. Nonetheless Deloitte’s report provides an intriguing starting point for an exploration of the conditions and requirements that offices of the future may be expected to meet.

Gavin Murgatroyd, partner at Gardiner & Theobald believes that the trends implied in the Deloitte report will become increasingly commonplace over the coming year.”We have seen tendered construction costs fall by 25% from peak in 2008 to trough over the last few years to be flat for 2013. At the same time there has been a swing in use of offices, with a push to increase occupancy density from traditional specification level of 1 person per 10 or 13 sqm to 8 -10 sqm per person, becoming more typical. To achieve even greater cost savings, undoubtedly more basic office buildings would help on construction and fit-out costs as well wholelife costs.”

While maintaining that it is still “cheaper to build open plan over cellular space”, Murgatroyd also believes that the increasing use of residential construction techniques such as “flexible use of the space and pre-fabricated and standardised building elements” can achieve additional cost savings.

A return to focusing on effectively managed spaces and services, rather than expensive bells and whistles could reap sustainability rewards

Jenny Pidgeon, director of responsible property investment at Henderson Global Investment broadly agrees with Deloitte’s findings and predicts that the kind of office they envisage will be especially prevalent in the less resilient regional market. She also maintains that this new future office typology may have a sustainability pay-off too: “Despite their increasingly high-tech spec, offices have not necessarily been performing better in terms of energy efficiency. So a return to focusing on providing effectively managed spaces and services, rather than expensive bells and whistles could reap sustainability rewards.”

While Deloitte’s vision is clearly dependant on utilisation of the emerging cloud and wireless technologies, opinions vary on just how much influence these technologies will have on the traditional office model. Nicola Gillen, practice lead and regional director of Aecom’s Strategy+ workplace specialist division (formerly DEGW Architects), is sceptical: “Many organisations are using wi-fi but few do so exclusively. Hard-wiring is still going into office buildings as a back-up or for more technical functions that need more reliable bandwidth. Network connections are likely to become wireless for certain sectors but wireless power seems some way behind this.” Richard Kauntze, CEO of the British Council for Offices, is also not entirely convinced about the extent to which new technologies will override existing IT infrastructure, pointing out that “even wi-fi needs cabling at some point”.

However, for Ed Bartlett, director of software company kykloud, the performance and capability of cloud technology is absolutely key to the realisation of Deloitte’s predictions for a leaner future office. “The current fixed infrastructure IT model could well be redundant, particularly when you consider the reduction in fit-out costs that could be gained by its removal. With increasing use of wi-fi and cloud technology, many offices simply do not need the server space. Whether you’re on an iPhone or PC, the device will increasingly be seen as a terminal or conduit to the data; they will simply be about viewing data and not storing it.”

Security is an issue that is perceived as one of the key challenges for the wider adoption of cloud technology. Therefore security concerns could affect the extent to which in the cloud ultimately shapes future offices. However, Bartlett is bullish, maintaining that the cloud already has “extensive security measures in place and that secure, protected data centre storage can offer better data security than a traditional server room.” 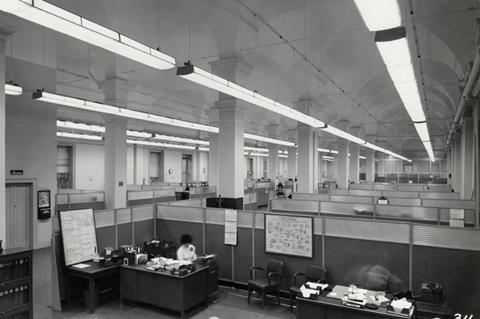 Above: Back from the Future?: Fifties offices were famously low-tech and low-spec but the downturn may be signalling their return Below: With its lavish decor and expensive finishes, London’s New Court (2011) represents the kind of sophisticated, high-tech and highly specialised office building that was once a sign of things to come 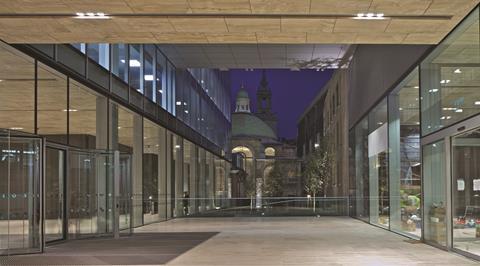 Intriguingly, however, Bartlett is not convinced that leaner offices necessarily means plainer ones. “I don’t think it will be a case of offices becoming less specified or less sophisticated. Future offices will have to be cleverer than just promoting hot-desking. Even with BIM or cloud working, people still gather together in a big room and stare at a big screen. Social interaction will still need to happen and providing collaboration space is the key.”

This is a position heartily endorsed by Kauntze. “The social aspect is hugely important to offices, especially when technology is blurring the lines between work and home. Essentially, people like to be with other people and even new environments will have to respond to this. It’s fascinating to see what’s happening in the City of London today. Coffee shops are increasingly being used as casual offices because they’re comfortable and informal. And where did Lloyds of London begin over 300 years ago? In a coffee shop. In many ways the future will involve us going back to our roots.”

Future offices will have to be cleverer than just promoting hot-desking. Even with BIM or cloud working, social interaction will still need to happen

Kauntze’s historic anecdote certainly chimes with recent history too and forces an interesting evaluation of what exactly constitutes the physical classification of “an office”. After all, Churchill conducted the Second World War from a dungeon carved underneath Whitehall and Facebook was founded in a student dormitory.

Pidgeon also acknowledges the role of offices as social facilitators and predicts that “increasing the impact of workplaces on individuals’ productivity and wellbeing… is a far bigger nut to crack in terms of occupational costs than reducing the energy bill”.

Gillen too recognises the increasingly communal nature of company headquarters: “The role of the HQ is changing to one of global corporate community centre. Rather than simply accommodating desks, an HQ is about creating a dynamic, collaborative meeting place that draws people in. The work environment can play an important role in the attraction and retention of staff which is an increasing struggle for many organisations. The role of design will become more important in office buildings as organisations appeal to a younger generation of workers who are increasingly interested in flexibility, choice and variety in the workplace.” 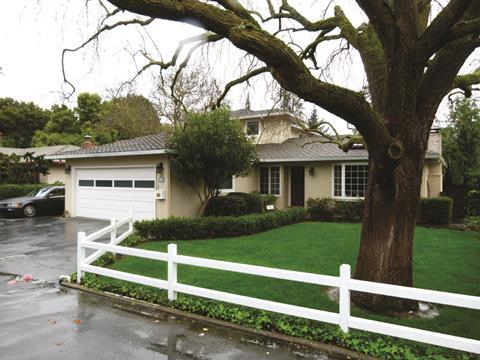 Working from home: If the office of the future becomes more domesticated in its character and construction, it could possibly take its cue from this innocuous suburban garage in Menlo Park, California, where Google was founded

However, despite sharing Deloitte’s back to basics methodology on a social level, Kauntze is far cooler on embracing the functional and economic rationale behind its predictions. “Reports by their nature take a stark view but offices shouldn’t simply be seen within the context of cost alone, especially when by far the biggest overhead businesses incur is salaries and not maintenance. Moreover, there will never be a one-size-fits-all solution to the office market. There will always be companies like Bloomberg, for instance, which will require the complex, highly specialised super-office; that is not going to change. But yes, in other areas of the market, there may well be a call to innovate and make offices simpler.”

Gillen too sees satisfying a wide range of demand as critical to the durability of the office model. “The answer will not be one building typology but a range, from out of town, lower spec, back office functions to pay as you go generic space, to very collaborative, memorable community spaces that require a significant investment in design and quality.” 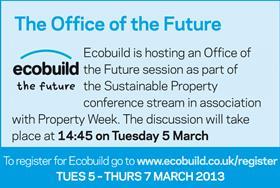 But for Gillen, the report has a far more fundamental flaw. “There may not be a demand for smaller, lower spec offices, for individuals to work alone or in small groups, when people can already do this from their homes and other locations such as cafes or on-demand office spaces. The report appears to make the assumption that it is desirable to build more office buildings and that this is where value creation lies. Forty years of research across the world shows us that office buildings are only occupied about 50-60% of the time. Rather than building new, we need to focus on adding value through reusing existing building stock more intensively.”

For both Gillen and Kauntze, retrofitting and converting existing buildings into offices will play a huge role in the future. Kauntze even concedes that, if necessary, this may mean the commercial industry adopting construction techniques of other sectors such as residential. These could include smaller spans, more cellular layouts and less ventilation equipment as a result of the smaller cooling loads demanded by new, energy-saving monitors and personal devices.

For Kauntze, the fundamental task that offices of the future will have to perform to survive will be “to respond as effectively as possible to requirements and to deliver what the customer wants at the most cost-effective price”. One suspects that, in a cyclical vindication of the Deloitte report’s retrograde conclusions, this is a timeless mantra that could just as easily have been applied to offices of the past and present as well.