Will the construction strategy help or hinder SMEs? 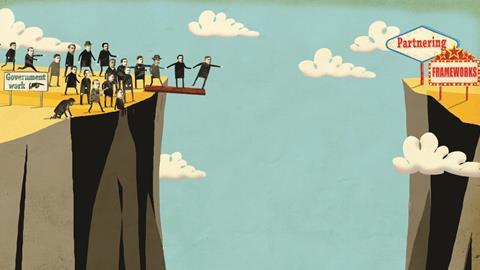 The coalition’s construction strategy was officially launched this week. How come SMEs are worried that life is about to become much more difficult? Building reports

If there’s one business issue the coalition government has sought to define itself by beyond cutting costs, it’s been help for small businesses. The prime minister himself has bemoaned public sector procurement managers who “think that the answer to everything is a big contract with a big business and who shut out millions of Britain’s small- and medium-sized companies from a massive potential market”.

To help SMEs, that make up 99.7% of our industry, the paymaster general Francis Maude says the government will “end the procurement oligopoly where innovative small firms are too often shut out of contract processes early on because of ridiculous rules and unnecessary bureaucracy”. Instead a target for 25% of contracts to go to SMEs has been introduced - an aspiration welcomed by small businesses.

﻿There’s rhetoric, and there’s reality - but there’s no join up. The policy statements are not based in reality in terms of the major buying bodies

But at a time when 11 construction firms are going bust every day, the question SMEs and other industry experts are asking is whether government policy won’t have
the opposite effect of what it intends. Graham Kean, head of public for consultant EC Harris, says: “There’s rhetoric, and there’s reality - but there’s no join up. The policy statements are not based in reality in terms of the major buying bodies.” So what’s causing the disconnect?

At the heart of it is the old chestnut of frameworks. This week Maude formally launched the coalition’s construction strategy. Written by chief construction adviser Paul Morrell, the strategy plots how the government can save up to 20% off the cost of buying building work across the public sector through tighter integration and smarter procurement. It also contains a large number of measures, from revising the way frameworks are designed, to moves to ensure speedier payment through the supply chain, designed to help SMEs.

The strategy envisages reforming frameworks to make them prove value for money and give opportunities for other players to come in when value isn’t being gained. However, they remain the principle game in town. Morrell admits that “there is perhaps no aspect of procurement that is more challenging, and about which there are more mixed feelings, than frameworks”.

The problem is this: frameworks are supposed to encourage the long-term partnership working envisaged by Morrell. But many public clients use them as a way of avoiding OJEU rules, meaning the benefits of continuous improvement aren’t realised. At the same time most frameworks have rigorous prequalification criteria covering everything from turnover and geographic spread, to equality and diversity policies. Only larger firms that can meet these criteria can get on the list, and others are excluded - even if smaller jobs more suited to smaller contractors are being procured.

Martin Tidd, the former UK managing director of one-time construction giant Multiplex, who now runs £70m turnover builder Primus in the South-east, has seen things from both sides. He says: “These initiatives favour the larger contractors. We’ve tried to get on these and been unsuccessful - the size of turnover is just one of a number of barriers that stop smaller contractors competing for this work.” Tidd, like many others in this part of the market, thinks both clients and smaller businesses would often be better served by direct tendering on price.

The other difficulty with the vision of an industry based on frameworks and long-term partnerships is over integrating main contractors and their supply chains. Some feel that only large contractors are likely to have the predictability of workload to make long-term agreements with their supply chain viable. Brian Berry, director of external affairs at the Federation of Master Builders, agrees: “The mood music is supportive. But in truth there is little of substance. Paul Morrell’s vision of integrating the supply chain to drive down costs has an almost inherent contradiction to the desire to help SMEs.”

It’s not just the government’s vision of the structure of the industry that worries SMEs. Under the construction strategy, BIM, designed to ensure all partners in a project are working from the same designs, will be rolled out to all government projects - and has technology costs as well as staff training costs. “BIM is just another barrier,” says Roger Skehen, managing director of Oddy Builders, a small builder in Yorkshire that has tried and, so far, failed to get on to public sector frameworks (“SME case study”, see box below).
The strategy also calls for savings through standardising designs and components - a move Morrell admits will require the scale of major builders to be successful.

As if all this wasn’t enough, lawyers argue that recent amendments to the Construction Act 2009 will make life harder for SMEs. One change seems to make it possible for main contractors to get specialists to pay the costs of adjudication, potentially making it more expensive for small firms to seek legal redress, while another appears to exempt PFI projects from fair payment rules designed to protect small businesses from abuse. Rudi Klein, chair of the Specialist Engineering Contractors Group, and supportive of the construction strategy, thinks these changes will have to be looked at in order to protect smaller firms that can’t afford full legal costs. “This could kill adjudication within five years if it goes ahead,” he says.

However, not everyone agrees that SMEs are being unfairly treated. Morrell is vigorous in his defence of the strategy, saying that it includes measures to deal with the wasteful prequalification processes, protracted procurement arrangements, onerous contract provisions and slow payment which are most damaging to SMEs. The government has also said it will eliminate PQQs from all tenders worth less than £100,000 - though this is yet to be extended to local government. Of frameworks, Morrell says: “We are aware that this is a bone of contention.

“However, businesses of every size are looking for visibility of the work that is coming their way, for early involvement in projects so they can add value, and for more continuity of workload so they can invest in skills, equipment and products - and I don’t know a better way of achieving this than via frameworks. This discussion is not over, and we remain open to ideas that serve the twin purposes of keeping access to the market place as open as possible, while securing the benefits of long-term relationships.”

Others who support this vision are concerned by the idea of special favours for SMEs, which could end up subsidising less efficient operations. David Fison, chief executive at £287m turnover contractor Osborne, says: “The government has to be seen to support SMEs, but in large-scale procurement, the reality is that SMEs feed in to larger organisations as part of the supply chain. You’re not about to let a nuclear power station contract to an SME.”

Morrell doesn’t accept that BIM will exclude some firms, because of its ability to aid collaboration and reduce cost quickly. And there are many who agree that his vision will reduce costs, despite the protestations of SMEs who think they can undercut lazy framework organisations. Klein thinks there is a middle way. “There is a tension but the vision is right. Integration and BIM are issues. Innovation is a barrier, so there has to be resources that help SMEs.”

Businesses are also coming up with other solutions, such as setting up consortiums. Groups of committed clients, such as the Fusion 21 group of North-west housing associations, have also changed the way that they procure frameworks to allow the work to benefit the local communities they serve.

But for supporters such as Klein, the way to ensure help for SMEs is through speedy payment down the supply chain. This is the logic of Morrell’s vision: contractors have a choice between gaining the scale to take the main contractor role, or fitting into a niche in the supply chain - with the government’s support to ensure that payment terms are honoured. The disagreement is between this vision, and firms that want to retain the main contractor role without growing to the size of Kier or Morgan Sindall.

Morrell doesn’t accept the contradiction between the promises to reduce procurement costs and the political pledges to help SMEs. “SMEs are not seeking special treatment, nor leave to be uncompetitive. The choice is between good processes and bad ones - we should be embarrassed if we present that to policy makers as a dilemma.”

Many others think it is disingenuous of the government, with its continued focus on efficiency in procurement, to pretend it can satisfy both the needs of the Treasury, the reality of public procurement having to be seen to be fair, and the political desire to be seen to help small business.

Oddy is a Leeds-based builder with a turnover of about £1.4m. Its biggest continuing customer is the University of York, for which it has completed a number of projects, but has thus far been unsuccessful in securing work from other public sector clients that use frameworks.

“We understand there have to be checks and balances on who gets public sector work, but when it comes to frameworks the procedures are too onerous on SMEs and are stifling potentially newer innovative companies. They’re a way for public clients to get around applying normal procurement rules on every project. The message we get is to become part of a bigger companies’ supply chains, but we don’t want to do that as it increases our risk that we won’t get paid. This allows big companies take the lions share of the work and beat up the supply chain.”

Skehan says he has spent three years trying to get public work, filling in 40-50 prequalification questionnaires, and has just got through this preliminary stage for the first time. He says the barriers for entry are high, as keeping up with environmental and equality and diversity policies are very expensive.

However, he is trying to find ways around the system, by looking to set up a consortium of smaller traders to take on bigger projects and break down these barriers. He is also undertaking a pro-bono pilot project for a local council looking at the thermal performance of school buildings. “We have to keep thinking outside the box and being creative about solutions, or I see nothing changing, though I’m still not convinced that will be enough” he says.