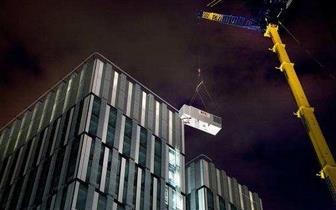 Contractor Overbury has installed the generators for the new office building at 3 Hardman Street for services engineers Hilson Moran.

Hilson Moran, 3 Hardman Street
A 500 tonne Liebherr LTM 1500 crane unit was used to crane the two 900kVA generators, which form part of the standby power system for the building, up fifteen floors to the roof of the building in the early hours of Sunday morning in central Manchester.

Hilson Moran was commissioned by The Bank of New York Mellon to advise on suitable office accommodation and to provide the M&E, public health and fire engineering services for the project.

The RAF was initially consulted regarding the possible use of a helicopter to lift the generators before a ground-based solution was considered.