The reported increase in enquiries failed to convert to orders, and lead times are overwhelmingly stable this quarter. The next six months look quieter still. Brian Moone of Mace reports

Despite the increase in workload reported last quarter, lead times for rotary piling remain at five weeks, the level they have been at for the past 22 months. Precast piling has remained stable at five weeks for more than two years.

There has been no movement in the wait for concrete works which remains seven weeks. The previously reported lead time for structural steel frames has levelled off at 14 weeks, having fluctuated over the past three quarters, ending in a reduction last quarter.

Metal panellised system lead times have stayed at 27 weeks for the past year.

Atrium roof have stayed stable at 27 weeks for more than two years. Contractors specialising in asphalt/
membrane roof finishes are reporting that the reduced level of activity over the past year is enabling them to continue to offer six week lead times.

The lead time for profiled metal roof finishes remains 12 weeks. Lead times for facade cleaning equipment remain at 30 weeks, as they have for the past three quarters.
Brickwork lead times remain stable at four weeks but blockwork has increased by one week to six.

Metal doors remain stable at five weeks, as does drylining at eight weeks.

Demountable partitions lead times have remained level at six weeks for the past year. The previously reported increase in enquiries does not appear to have turned into increased workload.

General joinery lead times remained static at 10 weeks despite last quarter’s forecast that increased workload could lead to longer times this quarter. Specialist joinery has not changed since the increase to 17 weeks last quarter.

Raised floors remain static at six weeks, so no change for more than a year. Enquiries remain quiet. A possible end-of-year shortage of chipboard is forecast.

Internal stone floor and wall finishes lead times have stabilised at 23 weeks for the past year. Soft floor finishes stay at seven.

Non-standard passenger lift lead times remain at 26 weeks, although the wait for specialist lifts will be longer. No change was reported for escalators (24 weeks).

Electrical package lead times have stabilised at 14 weeks. Increases in the price of copper are causing concern, although there are no reported issues with availability.

Mechanical packages have remained at 15 weeks for the past year.

The lead time for ductwork is eight weeks with no change forecast. Controls lead times have remained static at 15 weeks for over a year.

Hard landscaping lead times have stayed at eight weeks for more than a year. Logistics services have stabilised at five weeks.

The overriding message this quarter is no change. Very few are optimistic about the next six months, as order books are slim and there is no increase in enquiries. There are no problems with material availability despite reports of rising copper and steel prices. Labour and plant are also not an issue.

Data capture and analysis by Mace Business School, part of the Mace Group. For more details on the article and the contributors, please visit www.macebusinessschool.co.uk/foresite 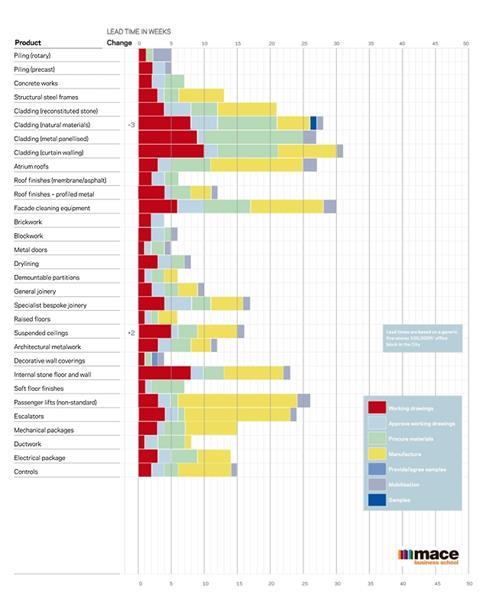