Despite some reports of increasing enquiries and workload, lead times have held steady for the most part as suppliers try to stay competitive. Brian Moone of Mace reports

Rotary piling lead times have stabilised at seven weeks for the second quarter, as demand from major infrastructure projects in London and the South-east has affected design approval and mobilisation times. Pre-cast piling has been stable at five weeks since 2008.

Concrete works lead times remain at eight weeks for the third quarter in succession, and structural steel frames lead times have remained at 16 weeks for over a year. There continue to be reports of delays in the supply of certain “advanced” steel sections from Europe but these are currently being absorbed in the programme.

Cladding - natural material lead times have remained at 28 weeks and cladding and metal panellised systems at 27 weeks for over a year. Cladding - curtain walling systems remain at 43 weeks.

Atrium roof lead times have been stable at 27 weeks since 2008, and asphalt/membrane roof finishes contractors have reported five-week times since the end of 2009 with no change forecast despite enquiries and workload being up. Profiled metal roof finish times have remained at 12 weeks.

Facade cleaning equipment lead times are reducing, down by two weeks to 33 weeks, due to less work providing more capacity in the manufacturing process.

Drylining lead times are stable at eight weeks, demountable partitions at six weeks and general joinery at 12 weeks with no change forecast in the next six months. Specialist joinery has increased by four weeks to 23, due to a higher level of design input required as a result of less information provided at order stage.

Architectural metalwork lead times have remained static at 12 weeks for more than a year, although enquiries are up.
Decorative wall covering lead times remain at four weeks, internal stone floor and wall finish remain at 24 weeks and soft floor finish at eight weeks.

Passenger lift - non-standard lead times remain at 26 weeks and escalator at 21 weeks, with no change forecast for either.

Electrical package lead times have remained at 14 weeks since mid-2009. Contractors are reporting a shortage of high voltage cable leading to longer lead in for this item (see spotlight).

Mechanical packages lead times have been adjusted to 16 weeks to reflect current feedback. Contractors are currently absorbing increased design time due to poor contract information. Workload remains the same but enquiries are up for the next six months. The lead times for ductwork and sprinklers remain at eight weeks.

Security systems times have remained static at five weeks for over two years, despite an increase in workload and enquiries. Controls lead times stay at seven weeks, and IT infrastructure equipment at six weeks.

Data and voice cabling lead times are 11 weeks, though contractors are forecasting this to increase in the next six months.

A number of contractors are beginning to report increases in enquiries and workload. However, most contractors anticipate that over the next six months lead times will remain the same as they absorb capacity and keep times down to remain competitive. Facade cleaning equipment is seeing a further reduction in lead time of two weeks due to increased capacity in factories.

Two trades, specialist bespoke joinery and mechanical services, are reporting an increased burden on design input as a result of receiving less information at tender stage, while mechanical services have been able to absorb this increase, specialist bespoke joinery lead times have increased by four weeks. Electrical contractors are reporting an increase in lead times for the supply of high-voltage cables due to increased demand created by the installation of wind farms. There are no reported issues with the supply of labour or plant.

Data capture and analysis by Mace Business School. For more details on the article and contributors, please visit www.macebusinessschool.co.uk/foresite 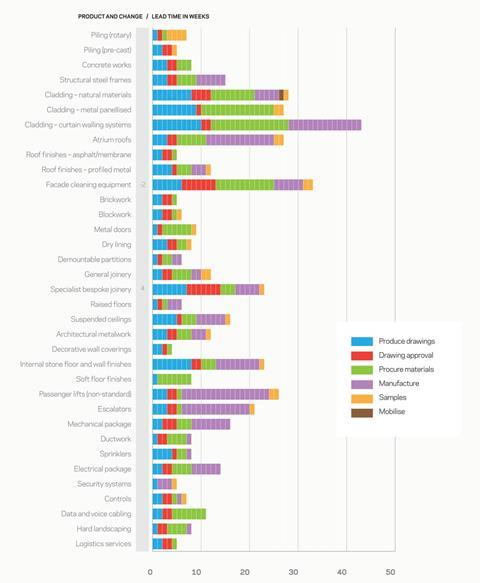