Northern transport leaders have written to the government asking to explore funding options that would allow the Northern Powerhouse rail scheme to be built in full.

The offer came in an open letter from Transport for the North (TfN) interim chair Louise Gittins in which she expressed the group’s “disappointment and dismay” at the government’s decision to downgrade spending on the route from £31bn to £23bn.

The high speed line between Liverpool and Leeds via Manchester and Bradford was significantly scaled back last month as part of the delayed Integrated Rail Plan (IRP). 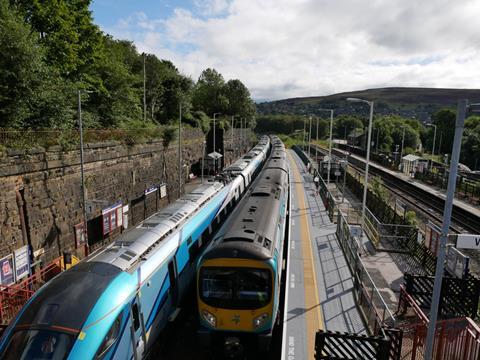 Instead of Leeds, the new high-speed line will finish at Marsden – more than 25 miles away

The new line will now stop at Marsden, a Pennine village to the west of Huddersfield in West Yorkshire, with the rest of the route being replaced by upgrades to existing lines.

TfN said there was unanimous support from its board to work with the government to “explore ways in which the long-term ambition underpinning its preferred Northern Powerhouse Rail network might be realised”.

In the letter, which was addressed to transport secretary Grant Shapps, Gittins said funding options could include local contributions.

She also said TfN’s board were calling for the technical work which was used by the government to justify the decisions made in the IRP to be published “as a matter of urgency”.

Gittins said the work needed to be made public so that there was “clarity about the basis on which decisions have been taken”.

She added that the “inadequate” IRP was “unacceptable for the North”.

The government’s revised plans would see eight fast trains per hour between Manchester and Leeds instead of 12 in the full NPR line.

The route would also skip Bradford, which is one of the UK’s worst connected cities with no direct rail access to Liverpool, Sheffield, Newcastle, Hull or Manchester Airport.

The IRP also confirmed that the £40bn eastern leg of HS2 from the West Midlands to Leeds would be scrapped and replaced by upgrades to existing lines.

The plan outlined £96bn of spending to upgrade railways across the UK, although £40bn has already been committed as part of HS2’s first phase between London and Crewe.

New schemes include track improvements to the East Coast Main Line, a new mass transit system in Leeds and upgrades to the Midland Main Line between London St Pancras, the East Midlands, and Sheffield.