MIT graduates design tiles that change colour based on temperature 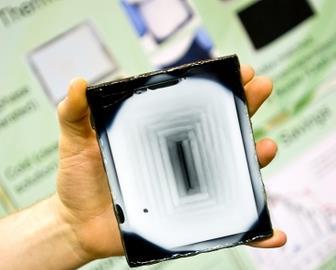 A team of recent MIT graduates has developed roof tiles that change colour based on the temperature.

The tiles become white when it's hot, allowing them to reflect away most of the sun's heat. When it's cold they turn black and absorb heat when it's needed.

The tiles use a common commercial polymer in a water solution. That solution is encapsulated — between layers of glass and plastic in their original prototype, and between flexible plastic layers in their latest version — with a dark layer at the back.

They are now working on an even simpler version in which the polymer solution would be micro-encapsulated and the tiny capsules carried in a clear paint material that could be brushed or sprayed onto any existing surface.

The team, dubbed Thermeleon because of its colour-changing property, was one of the competitors in this year's Making and Designing Materials Engineering Contest (MADMEC) a competition for teams of MIT students.