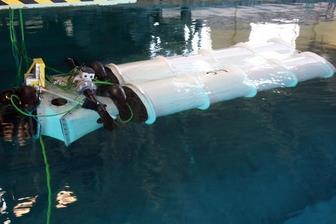 The Anaconda is a 200m water-filled tube, anchored to the seabed, which floats just beneath the surface of the water.

When it is squeezed down by waves, bulges form and travel the length of the tube, developing the power to drive a turbine in the tail (above). This energy is then captured and cabled ashore.

The Anaconda was the idea of Professor Rod Rainey, a chief engineer at Atkins, and has been developed by Checkmate Sea Energy with support from the Carbon Trust’s Marine Energy Accelerator initiative.

Rainey said wider use of wave conversion technology had been hampered by the fact that the machinery tended to deteriorate rapidly.

The non- mechanical rubber tubing of the Anaconda was an advantage because there were few moving parts to maintain.

Each 200m tube has the potential to generate 1MW of power, enough for 1000 homes. A spokesman for Atkins said the simple design and lack of costly maintenance made the Anaconda the “right product for the right time” given the economic downturn.

He said the next step in testing would be the development of a quarter-size model, 50m in length.

Checkmate is looking for investors to back a pilot commercial wave farm of Anacondas, which could be in operation by 2014.