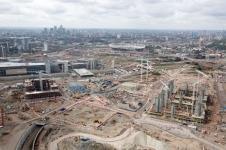 Plans for the construction of a temporary venue on the North Greenwich Peninsula to host badminton and rhythmic gymnastics in the 2012 games have been abandoned.

The proposal was dropped in favour of using existing facilities at Wembley.

The Olympic Board made the announcement today, subject to agreement from the international federations of each sport. The news comes despite fears from Badminton England that the time travel across London to Wembley would damage athletes' performances.

The announcement follows the intervention of mayor of London Boris Johnson, who said moving the sports to Wembley would save the £40m in construction costs.

The London Organising Committee of the Olympic Games (LOCOG) will present the proposals to the Federation Internationale de Gymnastique this week during their World Gymnastics Championships in London, and the Badminton World Federation next week.

The plans will then be presented to the International Olympic Committee (IOC) co-ordination commission in November, and to the IOC executive board for approval in December.

The Olympic Delivery Authority will submit the planning application for Woolwich in next few weeks.

The London Borough of Barking and Dagenham, identified as a potential alternative London 2012 venue location due to its proximity to the Olympic Park, has been identified as a suitable location for training venues and other operations in 2012. Further details will be announced in the New Year.