35% of civil engineering contractors will cut down on apprentices 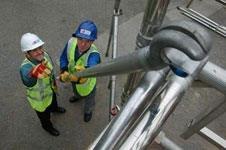 35% of civil engineering contractors will cut down on apprentices

Less than half of Civil Engineering Contractors Association members will take on new apprentices this year, a survey has revealed.

More than 100 companies of varying sizes from across the UK took part in the 2009 Training Survey, which was aimed at assessing the impact of the downturn on training programmes.

Commenting on the results, Rosemary Beales, the CECA director, said: “It is vital to guard against any future skills shortage and companies must prepare for the future by investing in training today.”