£53bn of development suspended in Dubai 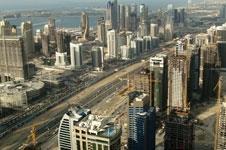 A report by banking giant HSBC has said that almost $75bn (£53bn) worth of property schemes have been put on hold in Dubai.

The firm made the comments in a note on Arabtec, one of the emirate's largest contractors and which is helping build the world's tallest tower - the Burj Dubai.

In its report, HSBC lists 59 projects that are under review, including eight that have been cancelled. The bank said high-end residential schemes and commercial developments were those most at risk of being shelved.

In the note, HSBC said: “The worst of news has seen cancellations of entire projects even though they appeared in advanced stages of construction.”

Nakheel has been the most high-profile developer to delay or cancel projects, including its Trump Towers hotel and residential project as well as its answer to the 818m-high Burj Dubai - the 1km-tall tower scheme.

Nakheel's problems have affected a number of UK firms, with as many as 200 jobs believed to be under threat after the company began a consultation with staff last month.

Arabtec is one of several firms bidding for the Saadiyat Beach Residences residential scheme in Abu Dhabi. Also in the mix are believed to be Dutco Balfour Beatty, the British giant's Middle East business, Belgian contractor Besix, which is also working on the Burj Dubai, and Multiplex.