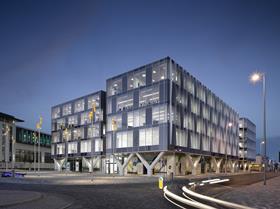 The move, which took effect from 9AM this morning, will see the 450-strong UK arm of the business separate from the rest of the group and rebrand as AHR. AHR chairman Brian Johnson, who was previously chair of Aedas UK, said there was no animosity behind the split, describing it as a “conscious uncoupling”.

The decision to split will see the business effectively demerge into the two companies, Hong Kong-based LPT and UK firm Abbey Holford Rowe, that joined together to form Aedas in 2002. The rest of the group, which is headquartered in Hong Kong and employs 1,400 designers in 13 offices in China, South-east Asia, the Middle East and the USA, will remain as Aedas. Financial details of the deal were not disclosed.

Johnson said the decision to demerge had been taken because the two firms had embarked on “very different trajectories” over the last year, with the Hong Kong business taking advantage of the booming Chinese commercial market, and the UK firm plotting steadier growth and having a larger reliance on public sector clients.

The split will leave AHR, which is just over half the size of the remaining portion of the group, as a 450-strong practice operating eight offices in the UK and four overseas. Johnson said the firm was also on course to open an office in Dubai with 10-15 staff by “late summer or early autumn.” This will service projects already won in the Middle East such as the £1.5bn Cleveland Clinic project in Abu Dhabi, as well as look to win new work.

Aedas has immediately announced its intention to open a 50-strong London-based office in the West End which will compete against AHR in the UK, though chairman Keith Griffiths said it would target overseas investors and developers active in the London market. Griffiths will oversee the setting up of the office, spending “significant time” in London.

Johnson said the former combined Aedas business, which has not yet published audited accounts for 2013, turned over £35m in the UK last year, making £900k profit. He said turnover for AHR in 2014 would fall following the demerger because of the decision to leave joint venture projects with Aedas, to about £31m. However he said he was expecting profit to rise to around £1m. The whole group turned over approximately £190m a year prior to demerger, meaning AHR made up just under a fifth of the whole business.

Johnson said discussions over the split started at the beginning of the year. He said the strength of the Aedas name internationally would leave the firm with work to do to re-establish itself overseas with the new brand. “Our immediate focus will be in building strength in the regions where we have eight offices, and we’ve managed to sustain those through the recession. Then we will have to stabilise office in Moscow Almati and Warsaw. Aedas has been a big name internationall, we’ll have to work harder there to get our brand strengthened.”

However, he said retaining the Aedas name, which was jointly owned 50-50 by the UK and Hong Kong-arms of the business, had not been a point of contention in the demerger talks. “Keith [Griffiths, Aedas chairman] had developed the business more internationally, and that name was better known internationally, whereas the UK business has been through changes before, so it’s not a big issue.”

The move comes as AHR, architect on the planned revamp of Euston and the £80m Holland Park School, has recently won work including a feasibility study for the planned £80m revamp of the BBC’s Oxford Road site in Manchester, and a new £10 office scheme for Cumbria County Council. It is also behind the £18m Talbot Gateway scheme for Blackpool Council (pictured).

Keith Griffiths, chairman of Aedas, said, “This move reinforces Aedas’ primary aim to provide international design services to the major world cities through our network of 13 offices and 1,400 staff.”

“We are keen to be active in locations with increasing demand for high rise, high density residential, commercial and infrastructure developments, and [which] recognise the long-term importance of international cities. The market for international design practices is changing as developers become international. Our realignment reflects this change by ensuring we are present in core markets for our global clients.”