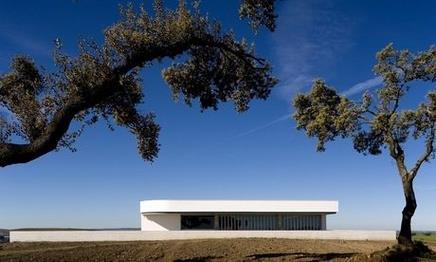 Álvaro Siza, the veteran Portuguese architect, is to be awarded the RIBA Gold Medal this afternoon by HM Queen Elizabeth II.

Siza is to travel to Buckingham Palace to receive the honour from the Queen herself, before travelling to the RIBA headquarters for a celebratory dinner in his honour.

The Royal Gold Medal, awarded for an architect's lifetime work, is personally approved by the Queen each year. Siza is being awarded his in person to commemorate the 175th anniversary of the institute.

Although cited as an important influence by a generation of European architects, Siza is not well known outside the sector in the same way as some of his contemporaries.

He has deliberately avoided celebrity, preferring instead to keep his practice small and his aesthetic carefully considered. The result is a body of work that could be described as a kind of experimental modernism - built mainly with a simple language of clean, white concrete but never afraid to embrace the unexpected.

Among Siza's best-known buildings are the Adeaga Mayor winery in Campo Maior and the swimming pools in Leca, both built in his native Portugal.

Sunand Prasad, president of the RIBA, said: “Álvaro Siza is simply a profoundly complete architect who defies categorisation. The forging of a masterful and seemingly inevitable architecture out of the possibilities of a site is one of the supreme characteristics of Álvaro Siza's architecture. He manipulates his readings of place into sculptural forms that are never predictable or ordinary, yet are never allowed to dominate over use or typological intelligibility.”

In an interview with Building, Siza said it was a “great emotion” to be awarded the Royal Gold Medal.

He said: “I remember when I was a young man, looking at the wall in the RIBA with all these great names on, and never imagining that one day I would be among them. It is a great emotion to receive such an award.”

Siza is the 159th recipient of the Royal Gold Medal, and follows in the footsteps of architects such as Le Corbusier, Denys Lasdun and Mies van der Rohe.