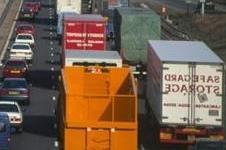 Balfour Beatty has won a £130m deal to build a congestion-busting 3,600-space lorry park near the M20 in Kent.

The contract from Highways England is a key part of its overall £250m lorry area, which was announced by chancellor George Osborne in the Autumn Statement last year.

The lorry park is seen as a long-term solution to Operation Stack – the emergency procedure whereby lorries are queued on parts of the M20 when unable to cross to the continent.

Balfour’s deal will cover developing plans during the project’s early contractor involvement phase and construction of the lorry area subject to getting the go ahead from government.

At peak construction, Balfour said the project could employ up to 150 construction workers and is set to be partially open by summer 2017.

It added the early award of the contract will minimise potential delays to work starting on site, once a location is finalised and the go-ahead given.

The contractor will use BIM on the project to define the “most efficient approach to design and the construction programme, avoid programme and utility clashes, improve the works sequence and optimise the design of the structures whilst reducing time on site and cost and enhancing safety.”

Commenting on the contract win, Balfour boss Leo Quinn said his firm’s “long standing relationship” with Highways England will be “crucial for the safe and successful delivery” of the project.

He added that the lorry park will provide “much needed relief to Kent’s road networks while supporting local economic growth and development.”