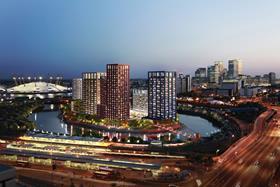 Developer Eco World Ballymore has launched the second phase of its London City Island development, with work reportedly starting on the scheme later this year.

The phase of the development comprises 417 new homes ranging from one to four-bed units in two blocks.

The overall 12 acre development in Canning Town opposite the O2, is described by the developer as a “mini-Manhttan” and will also house restaurants, shops and public spaces for installations and creative performances and will be connected to the rest of London by via a 260ft red bridge. According to construction data service Barbour ABI, the second phase construction cost is estimated at £150m.

The commencement of the second phase follows the English National Ballet’s (ENB) decision to move from its current home in Kensington to a bespoke 88,000 sq ft space on the island.

Sean Mulryan, chairman and chief executive of Ballymore Group commented that “recognition and sales for London City Island so far have been outstanding,” adding that he hoped the ENB’s would create “a vibrant, dynamic new neighbourhood with creative innovation at its heart”.