Bam & Co make most of school work before the bell goes

Business barometer £2.2bn is won in May as councils rush to let schools before Osborne’s Budget

Building Schools for the Future once again underpinned contractors’ workload in May - which will only heighten the industry’s fears that the government will take the axe to the £55bn scheme in the emergency budget on 22 June, or as part of the autumn spending review.

Bam Construct is a case in point: it climbed to the top of the table with two huge school wins worth a total of £305m: a £235m Camden BSF scheme and a £70m deal for Renfrewshire council.

Meanwhile, Carillon was helped into second place by more than £50m of education work. And Building understands that next month’s table will show that Balfour Beatty won a £220m BSF contract in Derby last week, and that Interserve picked up a £150m deal in St Helens. It begs the question, just what will the table look like in 12 months’ time?

Tony Williams, an analyst at economic consultant Building Value, said the wins could be the result of a rush to get projects through the door before it closes. He added: “BSF contracts will flatten out in 2011 then fall sharply in 2012.”

In total, just over half of contract income came from the public sector, including sixth-placed Rok’s £130m Oldham council housing win. Although the total value of contracts is higher than 2007, average contract values are lower: £5.3m compared with £6.6m three years ago.

Balfour Beatty remains far ahead of its rivals on the annual rolling leaderboard, and Laing O’Rourke edged back past Kier to third place, winning £2.5bn of work over the past year despite reports that it plans to close its Middle East arm owing to a lack of work.

For more rankings of UK contractors and consultants log on to 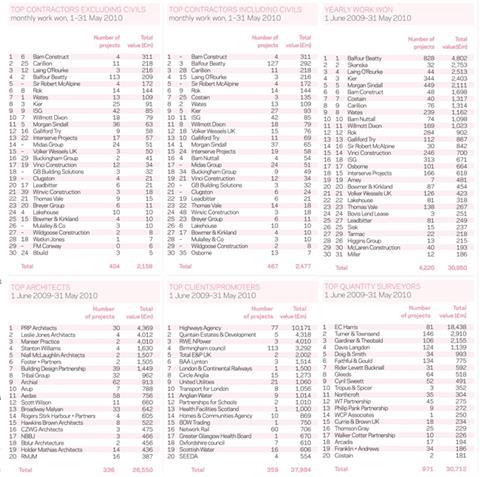