Wilkinson Eyre is the architect on the project for City, University of London 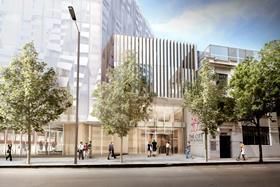 Bam has beaten off competition from Wates and Morgan Sindall to score a £42m job from City, University of London to build their new law school.

Two of these – a pre-fabricated health centre from the 1970s and a former factory from 1947 – will be demolished. Two other buildings, former factories at Goswell Road and the Myddleton Building, will be integrated into the new campus.

Wilkinson Eyre is the arctichet on the project, which is the university’s largest investment in its estate, and first new build in over a decade.

The new campus, which will be seven storeys at its highest point, will consist of the four blocks. A central atrium will connect them.

Work has begun and is expected to complete in mid-2019.