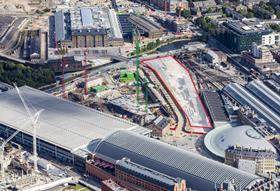 Building understands that Bam Construct has been chosen as the preferred bidder for the £300m main construction contract for internet giant Google’s King’s Cross HQ.

Bam beat Skanska and Carillion for the role, after Balfour Beatty was knocked out of the race at an earlier stage.

Contractors are understood to have been told on Friday (8 March) of the appointment of the preferred bidder.

Google announced in January that it had completed the purchase of 2.4 acres of the 67 acre King’s Cross development zone, which will be used to site the 1 million sq ft HQ.