Contractor was appointed to deliver the terminal expansion last year 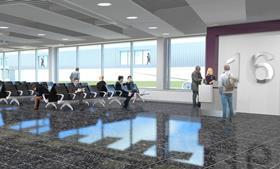 Bam has won a £10m contract to fit-out a new terminal extension at Edinburgh Airport.

At the start of last year, the contractor was appointed to deliver the first phase of the terminal expansion project, forming part of an £80m investment plan.

The project will also include link bridges and stair nodes to allow connection to new larger aircraft stands and an extension to the south east pier to provide additional departure and arrival gates.

Bam’s projects in Scotland include the V&A Museum of Design; new head office for chemicals firm Ineos in Grangemouth and the Stratified Medicine Imaging Centre of Excellence at the Queen Elizabeth University in Glasgow.