Quadrangle has 200-strong studio in Toronto 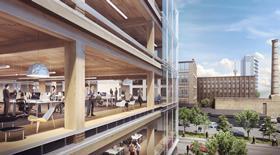 BDP has secured its first foothold in North America after snapping up a Toronto-based architect for an undisclosed sum.

The UK architect, which was itself bought by Japanese engineer Nippon Koei three years ago for just over £100m, already has six offices in the UK, plus three more in Asia and a further two in Europe.

And it now owns Quadrangle, a Canadian architecture and interior design practise with over 200 staff.

Quadrangle was founded in 1986 and works across the commercial, mixed-use, residential and retail sectors.

It is currently working on a number of schemes including 80 Atlantic Avenue (pictured), Toronto’s first wood office building in over 100 years.

BDP has confirmed Quadrangle will continue to operate under its existing brand name.

The deal will see four of the Canadian firm’s principals join BDP’s board.

BDP chief executive John McManus said: “Quadrangle supports our strategy to grow operations in the Canadian marketplace [and] will also enable both BDP and Quadrangle to expand our services into new regions.”

According to BD’s WA100, BDP is currently the 30th largest practise in the world, with 378 qualified architects, while Quadrangle is at number 94 with 110 architects.