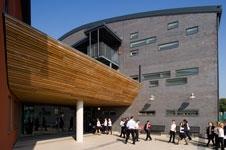 BDP has scooped a contract to design the Wellington Academy, near Tidworth in Wiltshire. The architect was selected as preferred bidder along with Kier Education.

Nearby public school, Wellington, will sponsor the new building, intended for 1,150 11-18 year-olds.

BDP said the school plan was set up around the idea of “serendipitous learning” linking a variety of spaces.

The design is to include a 350-seat theatre in the performing arts section. The facility includes a combined cadet force and separate boarding house for 100 pupils. Parent facilities are also provided on the site.

Project director, Keith Papa, said the “beautiful site” had inspired connections with the existing woodland: “The sponsor had a very clear vision and was excited by the idea of setting learning areas around a hub space where the business and enterprise specialism will be showcased … we are keen to create strong connections with the surrounding landscape.”