Be First ramps up homes plans 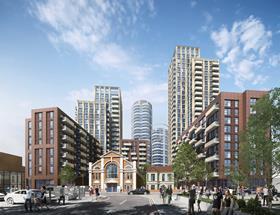 The east London housing developer working with McLaren, Wates and Willmott Dixon has said that it plans to build nearly 900 more homes than previously thought.

Be First is owned by Barking and Dagenham council and is working with McLaren on the first job let under its £1bn construction framework, a 29-storey tower (pictured) in Barking.

When it was set up two years ago it only planned to create 2,208 homes – but has now said it will build 40% more residencies than expected.

Be First, which is chaired by Bob Kerslake, the former head of the civil service, said its revised plans will see it build just under 3,100 homes.

It said the council-funded pipeline of development activity would cost a total of £777m, £148m more than had been outlined in its 2017/18 business plan.

But Iain Ferguson, Be First’s commercial director, said the business would deliver a cash surplus to the council at the end of this year.