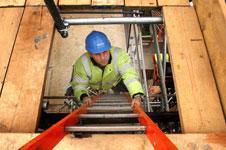 Bellway Homes has made 370 employees redundant, bringing the number of job losses in the housing sector over the past week to almost 1,000 as the credit crunch worsens
.

It emerged that the Newcastle upon Tyne firm cut 15% of its 2,476 workforce shortly after Taylor Wimpey announced that it was closing 13 regional offices, making 600 redundant.

Earlier this month, McCarthy & Stone and Crest Nicholson, which are each co-owned by HBOS and Scottish entrepreneur Sir Tom Hunter, cut 10% of their staff.

It is understood that redundancy notices have been sent out to Bellway staff over the past two months. It is thought that the cuts, by chief executive John Watson, have been made across the board rather than in any particular region or arm of the business.

A Bellway spokesperson would not comment on the scale of job losses but said the company was reviewing its cost base.

Chris Millington, an analyst at Numis, said the move was unfortunate but made good sense in the current market.

“Housebuilders are precious about losing their core people. At this stage the redundancies will be top-slicing of non-essential staff rather than deep cuts.”

Other housebuilders have played down the need for cuts. Mike Farley, chief executive of Persimmon, said his firm had lost only “tens of people” this year. Mark Clare, Barratt’s chief executive, said the company had scaled back its use of subcontractors but that it didn’t need to make internal cuts.

Millington said he thought that may be an overly optimistic forecast. He said: “If reservations continue falling by 50-60%, staff will need to be cut.”

Bovis Homes refused to disclose whether it had made cuts, and Tony Pidgley, chief executive of Berkeley Homes, said job losses were not needed in the foreseeable future. He said: “We’ve spent a long time building up the credibility of our team.”

Recruiters estimate that the number of job applications from housebuilders has doubled in recent weeks. Rob Smith, managing director of MRG, said: “The QSs and estimators are in a better position because they have transferrable skills. Those with a pure housing background like land buyers and house designers will struggle more.”

Meanwhile, building materials giant Wolseley has announced that it needs to “cut overheads” in Europe and the UK. Leslie Kent, an analyst at JM Finn said this was evidence of the housing downturn spreading down the chain.

On Wednesday Wolseley announced 250 job cuts in the US.